Surface Solar Radiation for Europe, Africa and the Atlantic based on MVIRI visible channnels 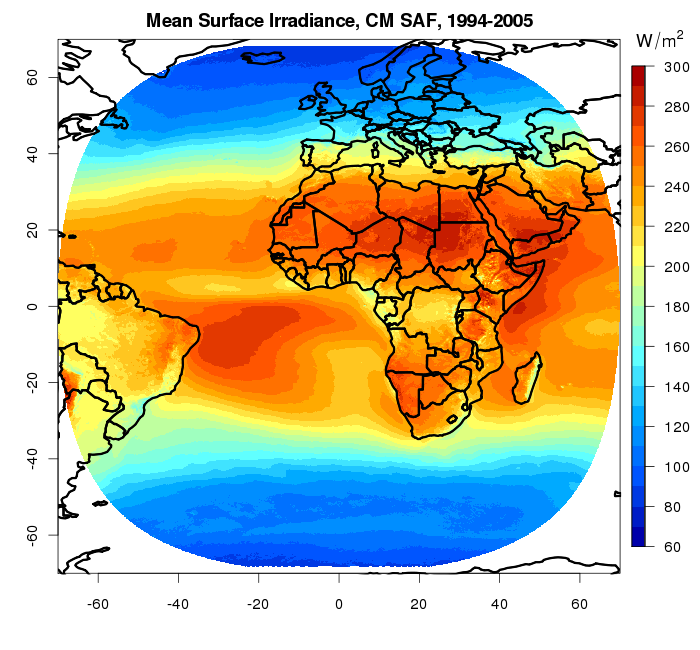 The EUMETSAT Satellite Application Facility on Climate Monitoring (CM SAF) provides a regional dataset of surface solar radiation, incoming direct radiation and effective cloud albedo at uniquely high spatial (0.03 deg) and temporal (up to hourly) resolutions for 1983 to 2005. The data set covers Europe, Africa, the Atlantic Ocean and parts of South America. Known as the CM SAF Surface Radiation MVIRI Data Set 1.0, the accuracy of a few W/M^2 (compared against BSRN) is comparable to or better than global products (such as NASA-GEWEX SRB). The data set is suitable for users seeking fine spatial and temporal resolutions for climate studies, evaluating global or regional models, or estimating potential solar energy production. The data are based on the visible channels of the METEOSAT Visible and Infrared Imager (MVIRI) on the Meteosat First Generation geostationary satellites.

#The following was contributed by Jörg Trentmann, (Eumetsat) February, 2013:

The CM SAF MVIRI surface radiation data set provides high-quality surface radiation data between 1983 and 2005 for the full disc of the Meteosat Geostationay Satellites, covering Europe, Africa and parts of South America, as well as the Atlantic Ocean. The data set includes the surface irradiance (i.e., global radiation), direct surface irradiance, and the effective cloud albedo. The data is provided as hourly, daily and monthy means on a regular lon-lat grid with a grid point distance of 0.03 deg. The high temporal and spatial resolution of the dats set is unique.

The data set has been validated against surface measurements of the irradiance and the direct irradiance from the Baseline Surface Radiation Network (BSRN). The accuracy of the monthly mean solar irradiance has been found to be approx. 8 W/m2, the accuracy of the corresponding direct solar radiation is approx. 11 W/m2. Further information of the validation results can be found in the validation report associated with the data set. Recent assessments of the temporal stability of the data set using surface reference observations from the Global Energy Balance Archive (GEBA) show a high stability in Europe after 1994.

The data set can be used to analyse the spatial distribution of surface solar radiation at local scales. The temporal and spatial resolution and the provision of the global and direct surface radiation allow the calculation of the potential of solar energy production. The high spatial resolution and the long time series allows the application of the data for climate model evaluation, incl. regional climate models. The stability of the data allows the detection and quantitfication of anomalies and the assessment of the temporal evolution incl. the determination of trends. The effective cloud albedo is a direct measure of the radiative effect of clouds on the top-of-the-atmosphere solar radiation and, hence, well suited for climate analysis.

In general, the validation with surface observations have shown that the data sets tends to overestimate the surface radiation by a few W/m2. The accuracy of the surface radiation is reduced over bright surfaces, due to the reduced effective cloud albedo. There are artificial 'stripes' and 'lines' in data before 1994 (only 'visible' at high spatial resolution) due to undocumented missing lines in the original satellite data. In general, the quality of the data decreases at high viewing angles, i.e., larger than approx. 60 deg, due to the overdetection of clouds at high viewing angles.## 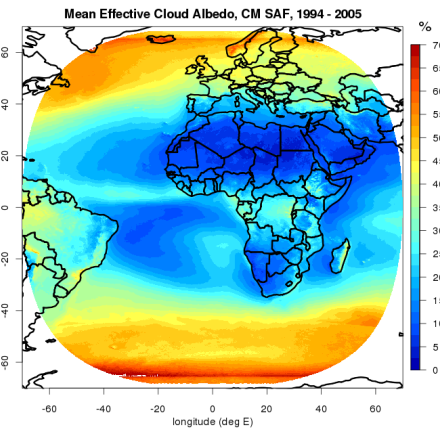 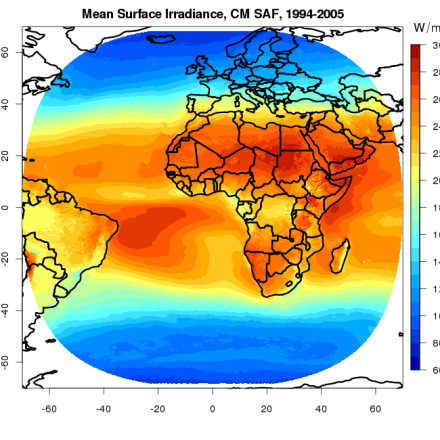 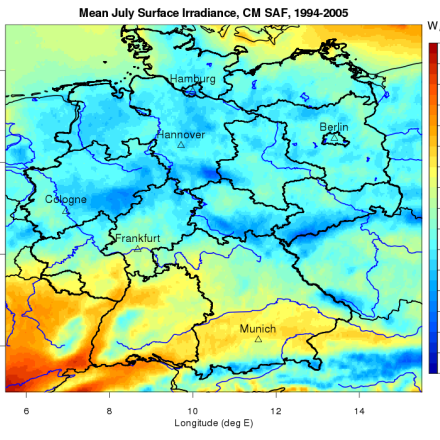 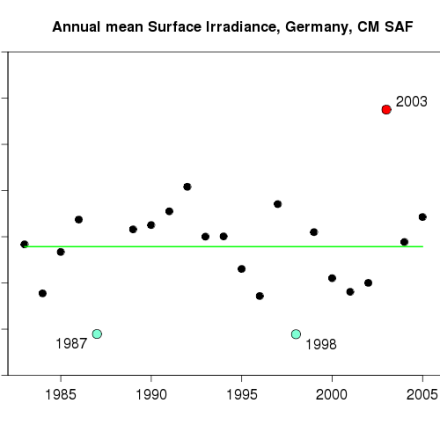 Time Series of the annual mean surface irradiance in Germany from 1983 to 2005. The years 1987/1998 and 2003 experienced the lowest / highest amount of solar irradiance. (Contributed by J. Trentmann)

Surface Solar Radiation for Europe, Africa and the Atlantic based on MVIRI visible channnels

Pages with expert guidance by Trentmann, Jörg
Surface Solar Radiation for Europe, Africa and the Atlantic based on MVIRI visible channnels