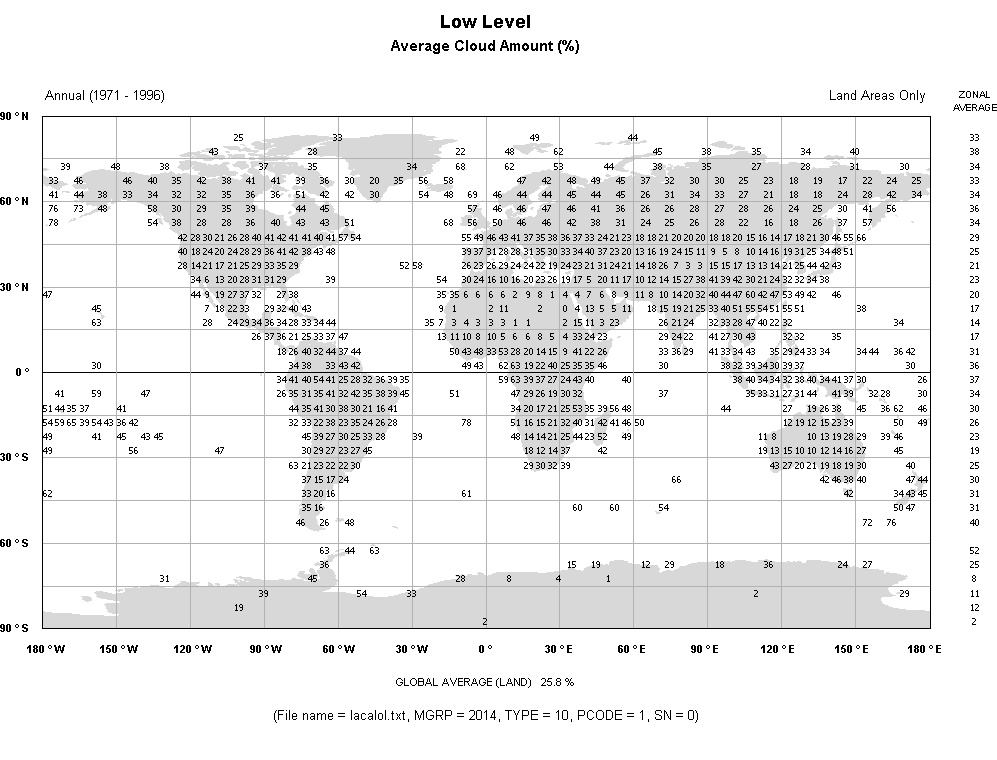 This digital archive provides multi-year monthly, seasonal, and annual averages in 5x5-degree grid boxes (or 10x10-degree boxes for some quantities over the ocean). Daytime and nighttime averages, as well as the diurnal average (average of day and night), are given. Nighttime averages were computed using only those reports that met an "illuminance criterion" (i.e., made under adequate moonlight or twilight), thus minimizing the "night-detection bias" and making possible the determination of diurnal cycles and nighttime trends for cloud types. The phase and amplitude of the first harmonic of both the diurnal cycle and the annual cycle are given for the various cloud types. Cloud averages for individual years are also given for the ocean for each of 4 seasons, and for each of the 12 months (daytime-only averages for the months)

The following was contributed by Joel Norris (Scripps Institution of Oceanography), September, 2013:

The Gridded Climatology of Clouds from Surface Observations Worldwide makes use of routine synoptic observations made by humans on ships over the ocean and at weather stations over land. Following the synoptic code (WMO, 1974), observers report the fraction of sky dome covered by all clouds, the fraction of sky dome covered by clouds in the lowest layer, the cloud type at low, mid, and high levels, and the height of cloud base. The developers applied quality control to raw reports obtained from several sources and compiled them into a single gridded dataset (Hahn et al., 2007).

Surface observers report sky dome cover in oktas (eighths). Because sky dome cover includes cloud sides, it is typically larger than true horizontal cloud fraction when cumulus clouds are present. Unlike the case for satellite retrievals, surface observers see low-level clouds without obscuration. Their view of mid- and high-level clouds is blocked, however, when low-level cloudiness is extensive. Total cloud cover and cloud cover of the lowest layer are directly reported, but cloud cover of higher layers are not. If only two cloud types are present, then coverage by the higher layer can be obtained from total and lowest-layer cover via an overlap assumption (usually random). The dataset provides estimated cloud cover by mid-level and high-level clouds when it is possible to calculate it.

The dataset includes five low cloud type categories: cumulus, cumulonimbus, stratocumulus, stratus, and sky-obscuring fog. Note that cumulonimbus is classified as a low cloud in the synoptic code even though it may have a high cloud top. Three middle cloud type categories include altocumulus, altostratus, and nimbostratus. All high cloud types are combined into a single cirriform category. The morphological identification of cloud type by human observers provides a qualitative description of small-scale atmospheric structure and processes that is often not available from satellite datasets and reanalyses (e.g., Norris, 1998).

Because the dataset is constructed from visual observations, no quantitative information is available on cloud optical thickness, cloud albedo, cloud temperature, cloud phase, cloud particle size and other properties often provided by satellite datasets. The dataset does include the average height of the lowest cloud base.

The dataset includes the phase and amplitude of the first harmonic of the diurnal cycle, calculated from the typical observing times for synoptic cloud reports at 0, 3, 6, 9, 12, 15, 18, 21 GMT for land and 0, 6, 12, 18 GMT for ocean. Because surface observers have difficulty correctly identifying clouds on nights with insufficient lunar illumination (Hahn et al., 1995), the nighttime averages in this dataset are from observations only under conditions of good illumination.

Cloud data are available as monthly, seasonal, and annual long-term means on a 5°´5° grid over land only, ocean only, and ocean and land together. Seasonal means for individual years are available for the 10°´10° ocean grid boxes. The longitudinal width of the grid boxes becomes increasingly larger poleward of 50° latitude to preserve roughly equal area. The number of observations contributing to the grid box averages is highly non-uniform. Sampling over land is generally greater than sampling over ocean, and the densest sampling occurs at northern middle latitudes for both land and ocean. Some grid boxes in remote areas of the southern ocean or desert land have too few observations to reliably calculate an average.

It appears that spurious multidecadal cloud variability is present in the ocean component of the dataset (Bajuk and Leovy, 1998; Norris, 1999; Eastman et al., 2011). The cause of these apparent artifacts has not been identified. Multidecadal cloud variability in the land component of the dataset appears more reliable, with the exception of spurious changes in cloud type over the former Soviet Union (Eastman and Warren, 2013). The user should exercise caution in the interpretation of long-term changes in cloudiness over ocean.## 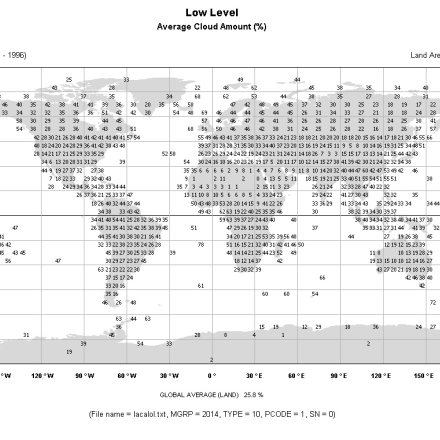 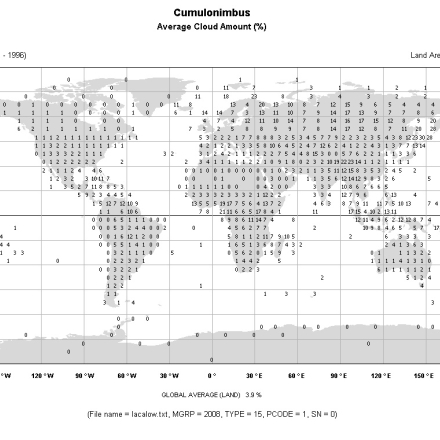 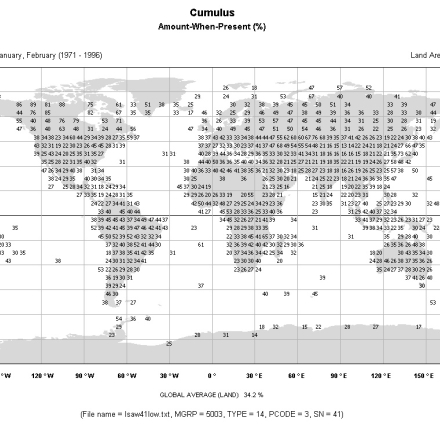