Spanning 1958-present, JRA-55 is the longest third-generation reanalysis that uses the full observing system (in contrast, products like ERA-20C and NOAA 20CR assimilate a very limited set of observations while NCEP R1 uses an antiquated model and assimilation scheme).  Compared to the previous generation Japanese Meteorological Agency (JMA) reanalysis, JRA-25, JRA-55 uses a more advanced data assimilation scheme (4Dvar vs 3Dvar), increased model resolution (T319L60 with a reduced Gaussian grid system vs T106L40 in JRA­25), a new variational bias correction for satellite data, and several additional observational data sources.   Among the improvements in the product are reduced biases in stratospheric temperature and Amazonian rainfall, and greater temporal consistency of the temperature analysis.  Some notable biases persist, including a dry bias in the upper and middle troposphere, and a warm bias in the upper troposphere.  The impacts of changes in the observing system on the forecast error are generally more evident in the Southern Hemisphere than the Northern Hemisphere.  Two companion datasets are available that allow users to address the impact of data assimilation: JRA-55C using conventional observations only and JRA55-AMIP using no data assimilation.

As with most reanalyses, diagnostic variables including precipitation and evaporation should be used with extreme caution

The Japanese 55-year Reanalysis (JRA-55, S. Kobayashi et al. 2015) is a comprehensive climate dataset covering the period from 1958, when regular radiosonde observations began on a global basis, to the present. JRA-55 is the first comprehensive reanalysis to cover the last half-century since the European Centre for Medium-Range Weather Forecasts 45-year Reanalysis (ERA-40, Uppala et al. 2005), and is also the first to apply four-dimensional variational analysis (4D-Var) to this period. The main objectives of JRA-55 were to address issues found in previous reanalyses and provide a comprehensive atmospheric dataset suitable for the study of multidecadal variability and climate change.

JRA-55 has been produced with the TL319 version of the Japan Meteorological Agency (JMA) operational data assimilation system (as of December 2009), which features numerous improvements made since the Japanese 25-year Reanalysis (JRA-25, Onogi et al. 2007). These include a revised longwave radiation scheme, 4D-Var and variational bias correction for satellite radiances. It also incorporates several newly available observational datasets produced as a result of ongoing efforts to improve quality of past observations, including homogenization of radiosonde temperature observations (Haimberger et al. 2008, 2012) and reprocessing of satellite data at major meteorological satellite centers. These improvements have made JRA-55 products considerably better than JRA-25 products.

What are the typical research applications of these data? What are examples from your work?

Reanalyses have been used widely for research into the mechanisms of the earth’s climate system, the study of predictability, and climate monitoring. Reanalysis has made especially great contributions to research on synoptic and planetary scale phenomena such as storm tracks, blocking, the Madden-Julian oscillation, the El Niño/Southern Oscillation and the quasi-biennial oscillation, and verification of reproducibility of these phenomena in forecast models. Reanalyses also provide initial conditions and reference data for hindcasts of seasonal forecast systems as well as forcing fields for ocean models and chemistry-transport models.

What are the likely spurious (non-climatic) features, if any, of time series derived from these data?

What corrections were applied to account for changes in observing systems, sampling methods or density, and satellite drift or degradation?

General guidance on processing and interpreting the data

Reanalysis can produce datasets for numerous types of meteorological variables, including those for which observations are sparse, in a physically consistent, spatiotemporally regular manner. However, the reliability of these variables depends on how tightly they are constrained by observations. Considerable uncertainty is especially observed in model diagnostic variables such as precipitation, evaporation, cloud amount and diabatic heating compared with analyzed variables. Great caution is needed when these model diagnostics are used because they are based on model prediction rather than analysis.

In data assimilation systems, products are created via the following analysis cycle: First, forecast models are provided with initial condition data from the most recent analysis in order to generate the background and atmospheric forcing fields necessary for analysis. Next, based on these fields and observations, analysis fields are generated to form the most plausible state of the atmosphere. These fields are then used as initial conditions for the next forecast. Due to the practice of observational correction for forecasts (also known as analysis increment), the energy balance is not exactly preserved in reanalysis. The introduction of analysis increment also creates an artificial sink or source in the water budget, which in turn leads to spin-up issues (in which precipitation is insufficient immediately after the start of forecasts and then gradually increases) or spin-down issues (the reverse) with the hydrological cycle. Great caution is needed when hydrological variables from reanalyses are used, especially for model diagnostic variables such as precipitation and evaporation (Bosilovich et al. 2011; Trenberth et al. 2011).

General strategies for comparison of the data with model output

Some of the numerous meteorological variables included in JRA-55 products (JMA 2013, 2014) are not necessarily of sufficient quality for model evaluation purposes. Users are encouraged to read the JRA-55 comprehensive report (S. Kobayashi et al. 2015) and the works it references to determine whether variables of interest are of sufficient quality for the intended application. In some cases, the use of analysis fields as input for users’ own simulators may be a viable option for generating diagnostic variables with a level of accuracy higher than those of reanalyses.

What are some comparable data sets, if any? Why use this data set instead of another?

Reanalysis efforts are continually undertaken at major NWP centers and meteorological research institutes (a detailed list is available at http://www.reanalyses.org). The quality of recent reanalyses has markedly improved, and new classes of reanalysis currently available include atmosphere-ocean coupled reanalysis and 20th century reanalysis based on data from fixed observing systems. JRA-55 is a full-observing-system reanalysis covering the last half-century. It is designed for high instantaneous accuracy based on the use of as many observations as possible while allowing for the impacts of changes in observing systems.

To aid further study of the reproducibilities of low-frequency variability and trends in JRA-55, as well as the impacts of model biases and changes of observing systems, the Meteorological Research Institute has produced a reanalysis assimilating conventional observations only, called JRA-55C, and an AMIP-type simulation, called JRA-55AMIP. These are produced with the same NWP system as used for JRA-55, and they are made available together with JRA-55 products as the JRA-55 family. ## 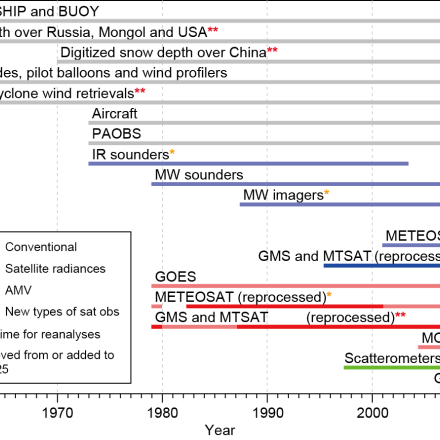 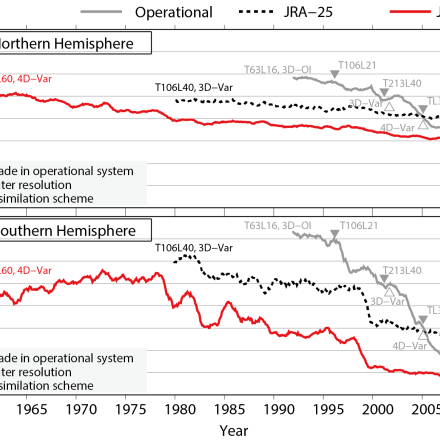 RMS errors of 2-day forecasts of the geopotential height at 500 hPa averaged over the extratropics of the (a) Northern and (b) Southern Hemispheres from JRA-25, JRA-55 and JMA operational system, verified against their own analyses. Changes in the assimilation scheme and resolution of the outer model are also noted. Each value represents the average for the last 12 months. Source: S. Kobayashi et al. (2015, Fig. 12) (contributed by S Kobayashi) 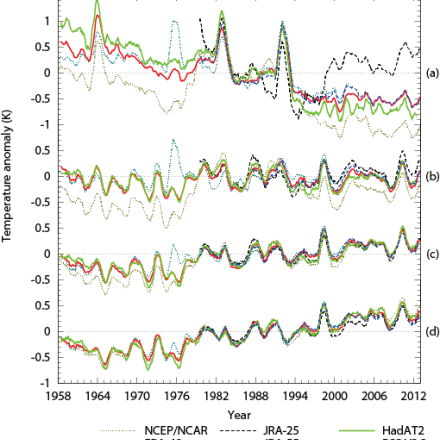 Twelve-month running mean temperature anomalies for the (a) lower stratosphere, (b) upper troposphere, (c) middle troposphere and (d) lower troposphere averaged over 82.5°N to 82.5°S. Time series from RSS V3.3 represents measurements by the MSU channel 4, 3 and 2, and the lower tropospheric extrapolations, whereas those from HadAT2, the NCEP/NCAR reanalysis, ERA-40, JRA-25 and JRA-55 are MSU equivalent brightness temperatures. Anomalies for each dataset were defined relative to their own climatological monthly means over 1979–1998. Source: S. Kobayashi et al. (2015, Fig. 14) (contributed by S Kobayashi)