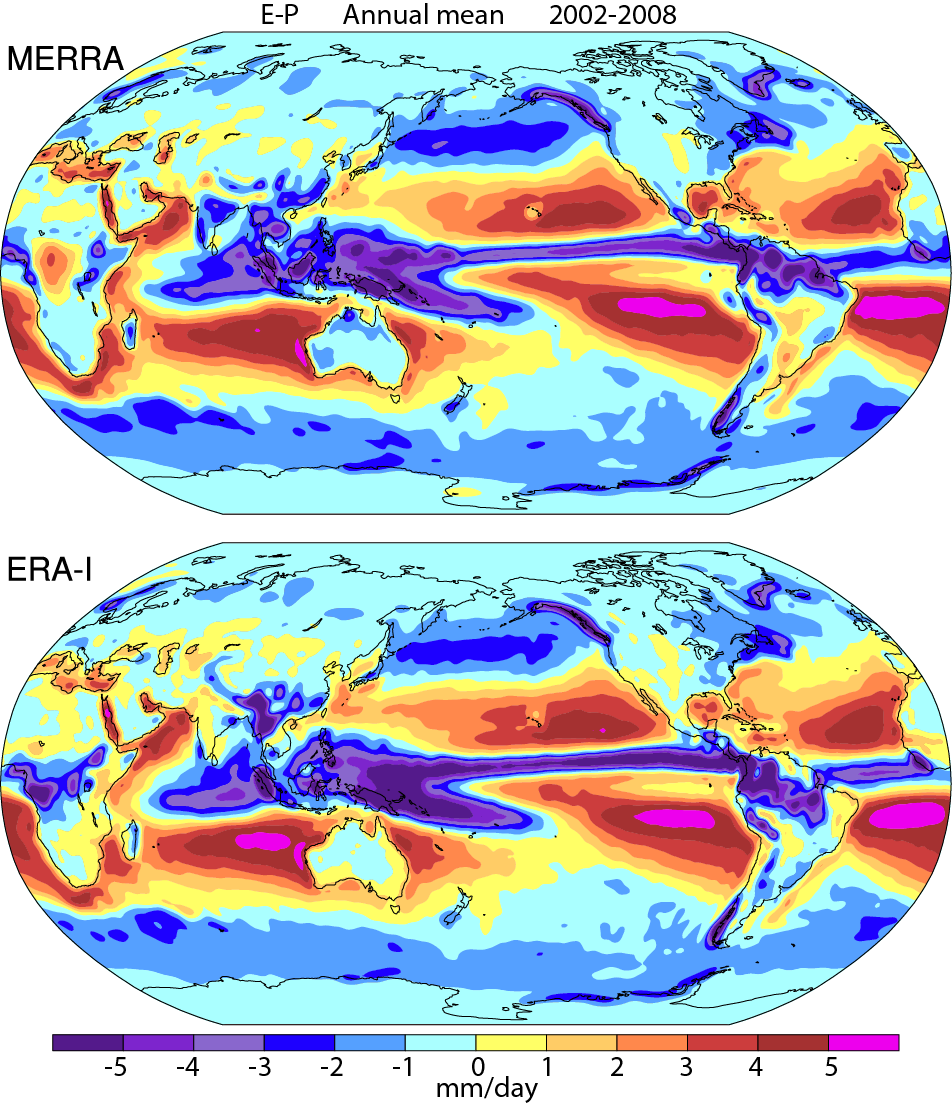 Reanalysis a systematic approach to produce data sets for climate monitoring and research. Reanalyses are created via an unchanging ("frozen") data assimilation scheme and model(s) which ingest all available observations every 6-12 hours over the period being analyzed. This unchanging framework provides a dynamically consistent estimate of the climate state at each time step. The one component of this framework which does vary are the sources of the raw input data. This is unavoidable due to the ever changing observational network which includes, but is not limited to, radiosonde, satellite, buoy, aircraft and ship reports. Currently, approximately 7-9 million observations are ingested at each time step. Over the duration of each reanalysis product, the changing observation mix can produce artificial variability and spurious trends. Still, the various reanalysis products have proven to be quite useful when used with appropriate care.

Reanalyses incorporate millions of observations into a stable data assimilation system that would be nearly impossible for an individual to collect and analyze separately, enabling a number of climate processes to be studied

Observational constraints, and therefore reanalysis reliability, can considerably vary depending on the location, time period, and variable considered

The changing mix of observations, and biases in observations and models, can introduce spurious variability and trends into reanalysis output

Diagnostic variables relating to the hydrological cycle, such as precipitation and evaporation, should be used with extreme caution

Varies with the source. Please remember to cite your sources.

The following was contributed by John Fasullo, NCAR, NOV, 2011:

#The use of 'n-th generation reanalysis' to classify different reanalyses [which you will see on the pages linked to in the table below] is based on the incremental advancement of reanalysis techniques. While uniform distinctions between groups of reanalyses are somewhat artificial, the introduction of major advancements in the reanalysis methodologies over time and the opportunity to learn from earlier reanalysis efforts are clear. In this context, our description of reanalysis efforts as 1st-generation (such as the initial reanalysis efforts of NCEP-NCAR and NCEP-DOE) and 2nd-generation (ERA40,JRA25) correspond, in part, to their evolving abilities to assimilate the full suite of available satellite radiances. For example, the NCEP-NCAR and NCEP-DOE reanalyses do not assimilate satellite water vapor channels over ocean while follow-on efforts do. The 3rd-generation efforts, such as ERAI, MERRA, CFSR, used more sophisticted data assimilation approaches (e.g. analysis increments and 4D-Var) and models and, again, addressed issues discovered in the 2nd-generation reanalysis efforts. Nonetheless, the artificial nature of these distinctions is evident in CFSR, which in many ways can be viewed as a 1st generation effort as it is the first reanalysis to include an interactive ocean in its reanalysis forecasts. Other reanalyses, such as the 20th Century reanalysis, further defy this simple classification as in attempting to extend its record back in time to the late 19th century, it intentionally excludes much of the modern observational record.##

The following was contributed by Dennis Shea, NCAR, NOV, 2011:

#Generally, users are advised to use third generation reanalysis products (ERA-Interim, MERRA, CFSR). To illustrate "use with appropriate care", the included figure of evaporation minus precipitation (Trenberth et al., 2011 J Clim v24 p4907), shows agreement over much of the globe. However, over Africa the derived estimates are of different sign!

Intercomparisons between similar generation reanalysis products may yield estimates of the uncertainty of some variables and derived quantities. Additionally, reanalyses can serve as focal point for model intercomparisons.##

The following was contributed by Dick Dee, ECMWF, March, 2012 (full contribution on the ERA-Interim page):

Most users do not have access to the information needed to answer the difficult questions listed above. On the other hand, producers of reanalysis data do not have the resources (nor the application-specific knowledge) to answer them either. The challenge is to provide better tools and information to support users in making their own uncertainty assessments. In particular, it should be made much easier for a user to get detailed information about the observations used in reanalysis, including the quality assessment and bias adjustments produced by the reanalysis process itself.## 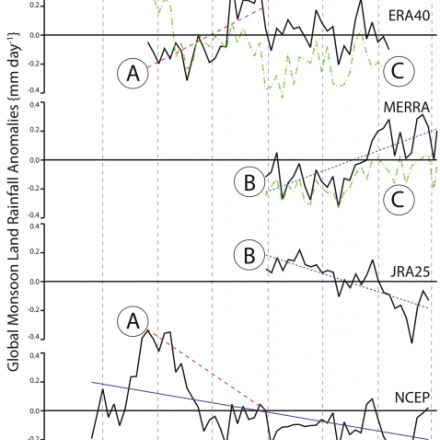 What are the trends in monsoon rainfall? This figure illustrates the evolution of the global monsoon rainfall over land as estimated from various reanalyses and GPCP. Several identifiably spurious features exist including contradictory trends prior to (A) and during the satellite era (B), and inconsistencies with moisture convergence estimated from the mass-corrected atmospheric moisture budget (C). Figure by John Fasullo based on Fasullo 2012 (see Key Publication #5 in the References section). 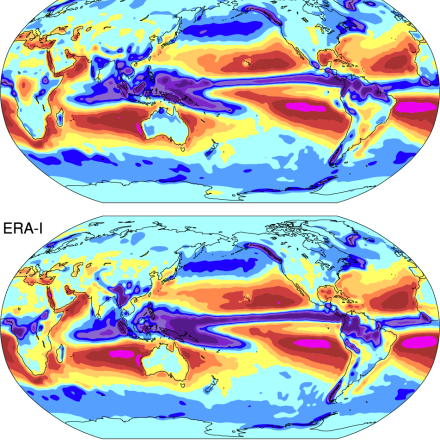 Evaporation minus Precipitation in MERRA (top) and ERA-Interim (bottom) based on Trenberth et al. (2011). (Contributed by J Fasullo) 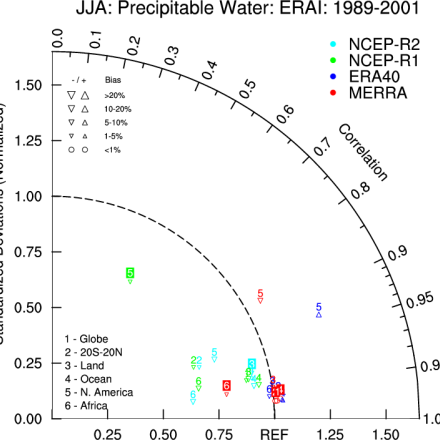 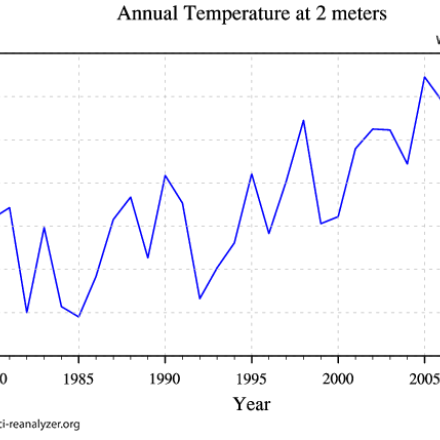 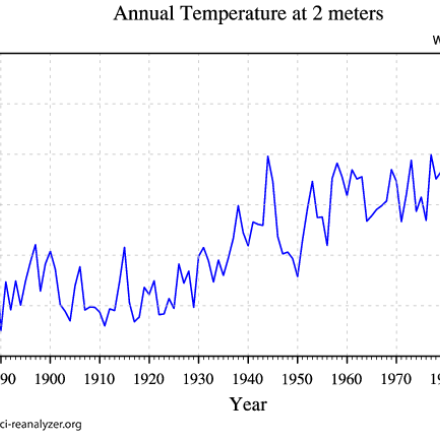 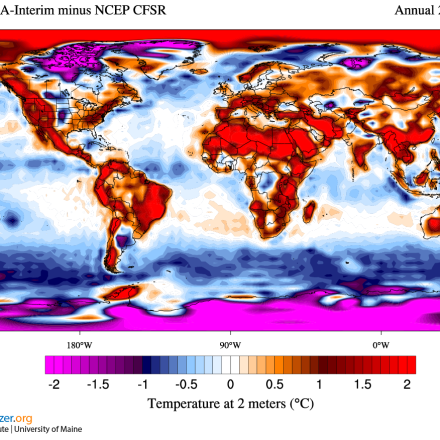