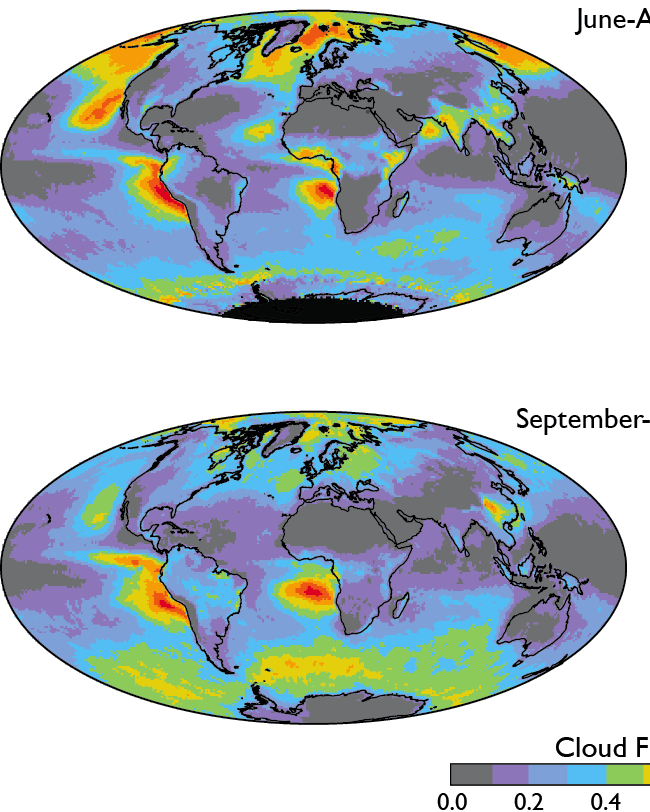 The Moderate Resolution Imaging Spectroradiometer (MODIS) is scanning instrument that makes measurements in 36 spectral bands from the visible to the thermal infrared at spatial resolutions from 250 m to 1 km. There are MODIS instruments aboard two sun-synchronous polar-orbiting NASA satellites: Terra, which has a daytime equatorial crossing at about 10:30 am local time, and Aqua, the primary platform of the “A-train” constellation, which has an equatorial crossing at about 1:30 pm local time. This page discusses cloud observations available from MODIS, and especially a dataset developed especially for the evaluation of global models. An Obs4MIPS version is also available with monthly estimates of total cloud fraction based on the Terra data.

Excluding partly-cloudy pixels complicates comparisons with models and other observations

Retrievals can be biased when clouds are broken, inhomogeneous, or contain drizzle (particle size)

The following was contributed by Robert Pincus (University of Colorado), December, 2012:

MODIS cloud properties are determined in steps. First, the “cloud mask”, with a wide range of situation-dependent tests using measurements in many spectral bands, determines the likelihood that a pixel contains some cloud. Next, cloud-top pressure is estimated, first using a technique based on absorption by carbon dioxide. The so-called CO2 slicing technique fails if the cloud is too low in the atmosphere, in which case MODIS (like ISCCP) uses an estimate based on infrared window emission in a channel centered at about 11 µm. Cloud thermodynamic phase is determined from further spectral tests. Finally, optical thickness and particle size are retrieved simultaneously (Nakajima and King, 1990) by minimizing the differences between observations and forward calculations at two wavelengths (nominally 0.86 or 0.65 µm and 2.1 µm). Liquid or ice water path is estimated from the product of particle size and optical thickness (following Stephens, 1978) but does not represent any additional information.

Like all current global passive remote sensing retrievals, MODIS uses forward models that assume plane-parallel, homogeneous clouds within each pixel. MODIS differs from other datasets (notably ISCCP and MISR) because it attempts to identify and exclude partly-cloud pixels before determining thermodynamic phase, particle size, and optical thickness. In the global, long-term mean “clear-sky restoral” removes about a quarter of all pixels identified by the cloud mask, so that the retrieval cloud fraction (about 50%) is substantially lower than the mask cloud fraction (about 67%, in line with similar estimates). Clouds with low optical thickness (less than ~3) are much less frequent in MODIS observations than in comparable data sets. For more information see Pincus et al. 2012.

MODIS estimates particle size at three independent wavelengths with increasing amounts of absorption by condensed water (1.6 µm, 2.1 µm, and 3.7 µm). Estimates from 2.1 µm are aggregated, but these can be substantially higher than estimates made from measurements at 3.7 µm (doi: Zhang and Platnick, 2011). Estimates from 1.6 µm signals are even higher. This may be due to small-scale variability in cloud properties (Zhang et al., 2012), to the presence of drizzle (Nakajima et al., 2010), or to some combination, but large time-average values of particle size, especially in regions of low cloud fraction, should not be taken literally.

Aggregated MODIS data is available at daily, eight-day, and monthly intervals on a 1-degree equal angle grid. Averages are reported for all clouds and for the subsets of ice and liquid clouds. Linear and logarithmic averages of optical depth are reported (the exponentiated logarithmic average gives roughly the correct mean albedo at cloud-top when coupled with the same surface spectral properties used in the MODIS algorithm). Many joint histograms are provided (optical thickness/cloud top pressure, optical thickness/particle size, etc.)

A MODIS “instrument simulator” is available as part of the COSP package (Bodas-Salcedo et al., 2011, http://cfmip-obs-sim.googlecode.com). Output from this simulator can be directly compared to a subset of the monthly aggregated data described in Pincus et al. 2012.

MODIS cloud fraction estimates from the cloud mask are comparable with ISCCP, MISR, and PATMOS-X, as are optical thickness comparisons that account for clear-sky restoral by MODIS (this can be accomplished in practice by excluding the thinnest clouds from the comparison). Particle size estimates are roughly comparable with PATMOS-X, though this too is complicated by MODIS clear-sky restoral. MODIS estimates of condensed water path are not comparable to microwave estimates except in carefully controlled circumstances (Seethala and Horváth, 2010). ##

MODIS-Joint-Histogram: Global-mean joint histogram of cloud optical thickness and cloud-top pressure as observed by MODIS (Terra and Aqua combined). MODIS does not perform retrievals on pixels thought to be partly-cloudy and reports substantially less optically-thin cloud than other sensors. From Pincus et al., 2012. Contributed by R. Pincus. 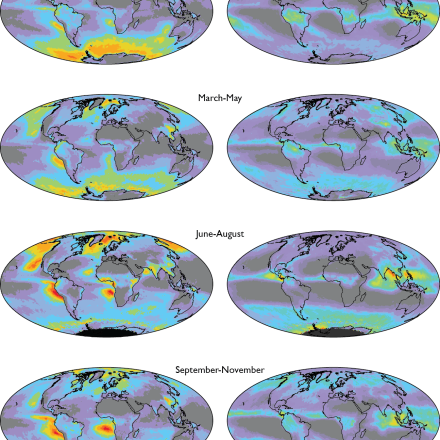 MODIS-cloud-fractions: Seasonal cycle of daytime-only liquid and ice cloud amount as observed by MODIS aboard Aqua (2002-2012). These figures show the fractional area for which optical properties are successfully retrieved and so omit pixels thought to be partly-cloudy as well as clouds of indeterminate phase. The sum is therefore less substantially less than other estimates including the MODIS cloud detection algorithm. After King et al. (2013). and contributed by M. King. 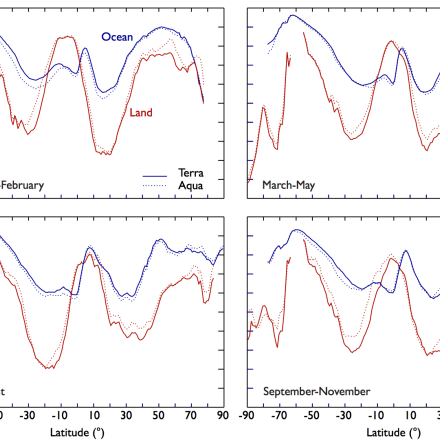 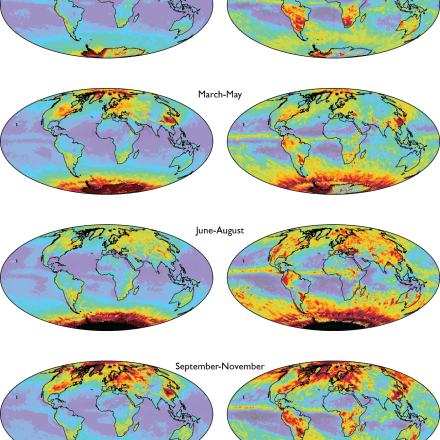 MODIS-LinearMean-Optical Thickness: Seasonal cycle of daytime-only liquid and ice cloud optical thickness as observed by MODIS aboard Aqua (2002-2012). Optical thickness is averaged linearly here and so gives a reasonable estimate of water mass but a poor estimate of the radiative effect of clouds for which the logarithmic mean (also available) is preferred. After King et al. (2013). and contributed by M. King. 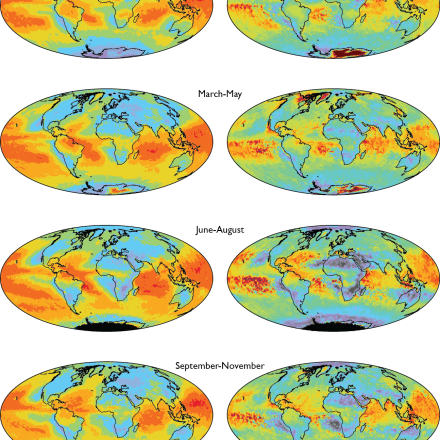 MODIS-Particle sizes: Seasonal cycle of daytime-only liquid and ice cloud effective radii as observed by MODIS aboard Aqua (2002-2012). These retrievals use the 2.1 micron band. Pixels thought to be partly-cloudy have been excluded but values, especially in low latitudes; this is thought to be related so small-scale cloud inhomogeneity in liquid clouds and to flawed radiative models for ice clouds. After King et al. (2013). and contributed by M. King.