EN4 subsurface temperature and salinity for the global oceans 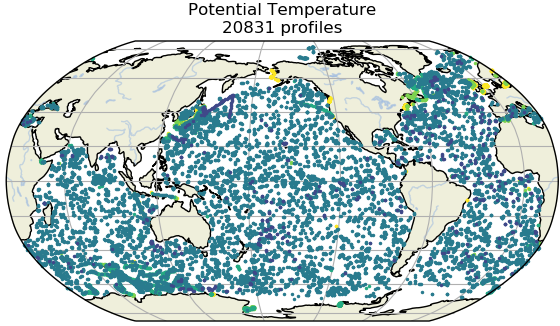 EN4 is a subsurface temperature and salinity dataset for the global oceans, spanning 1900 to present at a monthly timestep. It includes two types of data products: (1) a database of quality-controled in situ profiles and (2) a spatially complete analyses at 1 by 1 degree horizontal resolution and 42 depth levels for 83S to 90N. Input data include Argo (Argo, 2000), ASBO (Arctic Synoptic Basinwide Oceanography), GTSPP (Global Temperature and Salinity Profile Program) and WOD13 (World Ocean Database). The profiles include quality control flags while the analyses include observation weighting and standard error information. EN4 is used for monitoring ocean heat content and thermostreric sea level, initializing models and forecasts, and satellite data validation, among other applications. Due to the sparseness of ocean observations in some regions and time periods, studies of trends and variability should be approached with caution. Where observations are lacking, EN4 relaxes to a 1970-2000 climatology. Users should check the observation weights when doing such analyses.

Updated monthly, enabling it to be used for model/forecast initialization or climate monitoring

Relaxes to climatology in data-sparse regions. As such, EN4 analyses are not suitable for studies of long-term trends or low frequency variability across data-sparse time periods or areas

In some areas of high variability, standard errors increase with increasing observation numbers and therefore should be treated with caution

freely available for research and private use

The following was contributed by Rachel Killick, August, 2019:

EN4.2.1 is the UK Met Office Hadley Centre’s subsurface temperature and salinity data set. It is freely available for research and private use from https://www.metoffice.gov.uk/hadobs/en4/. The data set is built using four input sources: Argo (Argo, 2000), ASBO (Arctic Synoptic Basinwide Oceanography), GTSPP (Global Temperature and Salinity Profile Program) and WOD13 (World Ocean Database). EN4 is updated on a monthly basis (with approximately a half-month lag) and runs from 1900 to the present day. The data set is fully reprocessed approximately once a year to allow a fresh download of all the source data and the implementation of any desired changes e.g. implementation of new code or bug fixes. When a full reprocessing takes place the version number will be incremented. Monthly updates include the latest data from the two monthly-updating input sources, Argo and GTSPP; no code changes are implemented for monthly updates and only the three most recent months will be updated.

The monthly updating nature of EN4 would be considered one of its key strengths, enabling it to be used for model/ forecast initialisation and regular monitoring. Another key strength is the ensemble nature of this data set. Two oceanographic instruments eXpendable BathyThermographs (XBTs) and Mechanical BathyThermographs (MBTs) are known to exhibit biases in their recorded measurements. These biases can be corrected (lessened, although likely never removed entirely) by the implementation of bias correction schemes. EN4 implements two such bias correction schemes (Levitus et al., 2009 and the most up to date version of Gouretski and Reseghetti, 2010). Two more correction schemes (Cowley et al., 2013 and an update of Cheng et al., 2014) are planned to be implemented by the end of 2019.

A further strength is the availability of the data in two different formats, both served as monthly downloadable netCDF files. The first is the profile file format: this consists of individual profiles in space and time grouped into a global, monthly downloadable file. These profiles are all quality controlled using the automatic procedures detailed in Good et al., 2013. Second, profiles that pass quality control are combined with climatology and an objective analysis scheme to provide spatially-complete objective analyses for each month of the data set. These analyses are provided at a resolution of 1 by 1 degree from 83S to 90N and across the complete range of longitudes. The reason for the non 90 degree southern cut-off is the presence of land-only below this latitude, by not including these latitudes the file storage space can be reduced.

Multiple variables are served in the profile format files including in-situ and potential temperature and practical salinity. The quality control flags can be accessed at varying degrees of resolution according to whether the user wants a single flag for the whole profile, a ‘good’ or ‘bad’ flag for each level or a break-down (done using binary formatting) of which tests were failed at each level of the profile. Given that the quality control tests are automatic, with no visual inspection of profiles, we do not claim to have flagged every possible bad value and not flagged any good values. Uncertainties are currently not provided with the profile data (other than through the ensemble nature of providing more than one bathythermograph correction). However, we are currently investigating whether making use of the uncertainties provided by the IQuOD initiative would be of benefit to users (http://www.iquod.org/). Where it is known, the type of instrument which recorded the profile is provided. Profiles with more than 400 recorded depths are thinned before being provided in EN4, this thinning aims to retain the maximum amount of information possible without providing large files which are overly cumbersome. Profiles are thinned to have information approximately every metre down to 100m, then every 10m down to 1500m and every 50m after that; the lower levels are thinned first and as soon as 400 or fewer levels are achieved thinning stops being implemented.

The analysis files serve potential temperature and practical salinity at one degree by one degree spatial resolution and 42 irregularly spaced depth levels (increasing in separation as depth increases). These too are provided from 1900, but, in the absence of observations will relax back to a 1971-2000 climatology. This relaxation to climatology means that we do not recommend the EN4 analyses be used for long term trend analysis in data sparse time periods or areas. Alongside the ocean variables in the EN4 analyses there are also observation_weight analyses. These are provided on the same grid and provide information on how much a specific grid box in a specific month and year have been influenced by observations and how much by climatology. High values of the observation_weight imply good observational input, low values imply little observational input. The influence of an observation persists in time and is spread in space and therefore a high value of observation_weight does not always mean an observation at that specific time and location, but does suggest an observation in the spatial/ temporal vicinity of it. The analyses are provided with uncertainty estimates and these provide the analysis error standard deviations of the potential temperature or salinity analyses. It is known that in some areas of high variability these errors increase with increasing observation numbers and therefore should be treated with caution here.

A recent user survey has yielded information on the variety of applications for which EN4 is used. These range from ocean heat content and thermosteric sea level monitoring, model and satellite data validation and model and forecast initialisation as well as more bespoke uses such as tracking certain species of animals according to water temperature preferences.

EN4 is also used as the subsurface input to the, soon to be available, Hadley Centre Integrated Ocean Database (HadIOD, Atkinson et al., 2014). HadIOD combines subsurface data from EN4 and surface data primarily from ICOADS to provide an integrated surface and subsurface database ideal for ingestion into reanalyses and multiple other uses. HadIOD provides data with the same XBT and MBT bias corrections as EN4 as well as the Cowley et al., 2013 and the Gouretski 2012 corrections for XBTs. Bias corrections for surface data are also provided. Bias is split into macro-bias, at the level of the platform (e.g. XBT, MBT, bucket) and micro-bias, at the individual ship or float level. All measurements in HadIOD are quality controlled and have a unique identifier, uncertainty estimates are provided where possible.

Two of EN4’s contemporaries in the data set world include the CMEMS CORA data set (similar monthly profile and analysis files, but with manual QC and six monthly updates) and the World Ocean Database (profile files from pre-1900 to the present updated on a quarterly basis). These data sets should be seen as complementary and not in competition.

There do not appear to be repeated mistakes made when users are dealing with EN4 data, however, an FAQ page is provided to seek to answer the most common queries (https://www.metoffice.gov.uk/hadobs/en4/FAQ.html). Other queries can be asked using the ‘Contact Us’ link on the web pages. The most common query received relates to whether smaller input data sets are included in EN4, this can normally be answered by seeing whether the data set of interest is in the GTSPP, WOD or ASBO data we take, if they are then they should also be in EN4.## 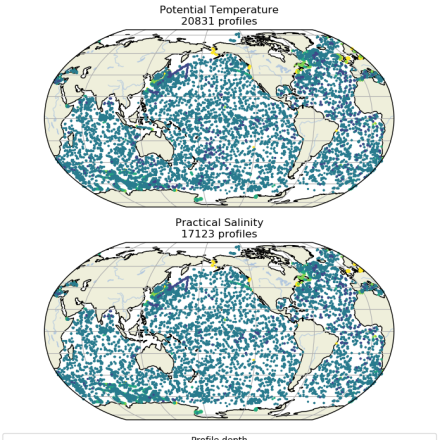 Figure showing temperature and salinity profile coverage in May 2019. This figure only shows the locations of profiles that have passed quality control (QC). The colour coding indicates the deepest depth level of that profile to have passed QC. (contributed by R Killick) 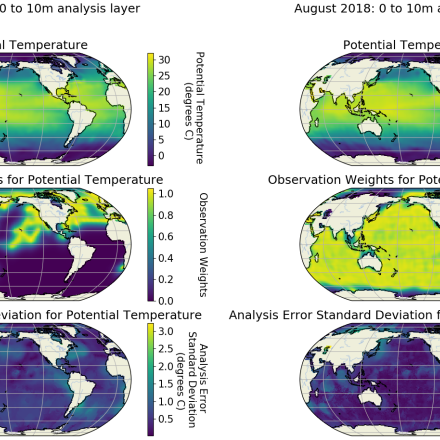 EN4 subsurface temperature and salinity for the global oceans

Gridded from obs | In situ