Ocean heat content for 10-1500m depth based on Argo

A regularly updated monthly timeseries of ocean heat content, based on Argo profiles, is integrated over 10-1500m depth and the latitudes 60°S-60°N. Coverage begins in 2005. It is estimated based on the method described in von Schuckmann and Le Traon (2011) and discussed in the context of other methods below.

Includes an estimation of uncertainties

Covers only the upper 1500 m depth of the global ocean

#The ocean has an important role in climate variability as the ocean’s net heat uptake is around 20 times greater than that of the atmosphere (Levitus et al., 2005). The precise estimation of Global Ocean Heat Content (GOHC) is of primary importance to analyze climate change as this parameter serves as a benchmark for a wide range of climate research studies and provide in particular an important measure of energy gained by the climate system (Hansen et al., 2011; Church et al., 2011). It is hence vital to achieve confidence in GOHC estimations. Fundamental progress has been made to estimate GOHC, but uncertainties remain.

Because of the huge heat capacity of the oceans, temperature changes must be measured with great precision. Achievement of sufficient precision has proven to be extremely difficult because of spatial and temporal sparseness of data, regional and temporal biases in observations, unknown contributions from the deep ocean, and changing proportions of data from different instrument types (e.g.  Domingues et al., 2008; Lyman and Johnson, 2008; Roemmich and Gilson 2009, Trenberth, 2010; Lyman et al., 2010). The majority of the historical global temperature changes come from Expendable Bathythermographs (XBT’s) and CTD (Conductivity/Temperature/Depth) shipboard measurements. The need for a homogeneous global observing system led to the implementation of the international array of Argo profiling floats in the year 1999 (Roemmich and Gilson, 2009; Roemmich et a., 2009). Argo is the first global real time in-situ ocean observing system with its 3000 profiling floats worldwide measuring temperature and salinity to 2000 m depth. One of Argo’s most important contributions is an improvement in estimations of heat stored by the oceans which is a key factor to gauge global warming and gain a better understanding of the mechanisms behind rising mean sea level. Identification of certain instrumental biases (Wijffels et al., 2008) and the use of Argo data have allowed improved estimates of GOHC (e.g. Willis et al., 2004; Domingues et al., 2008, Lymann et al., 2010, von Schuckmann et al., 2009; Levitus et al., 2009; Trenberth and Fasullo, 2010; von Schuckmann and Le Traon, 2011). But there remains a surprisingly large spread among different estimates of GOHC and the underlying uncertainties are still unclear (Trenberth, 2010; Lyman et al., 2010, von Schuckmann and Le Traon, 2011).

Global Ocean Heat Content (GOHC) from Argo observations is estimated here based on a simple box (5° latitude x 10° longitude x 3 months) averaging scheme using a weighted mean (von Schuckmann and Le Traon, 2011). To guarantee reliable data coverage at global scale, GOHC is calculated for the upper 1500m depth of the global ocean between 60°S-60°N and during the period 2005-2010 (Figure 1). Uncertainties due to data processing methods and choice of climatology are estimated (shaded area in Figure 1). This method is easy to implement and run and can be used to set up a routine monitoring of the global ocean. GOHC is based on a re-qualified Argo data set including individual visual check of suspect Argo data profiles (http://wwz.ifremer.fr/lpo/SO-Argo-France/Products/Global-Ocean-T-S).

The 6-year trend is calculated using a weighted least square fit and accounts for 0.54±0.1 Wm-2 for the ocean surface, i.e. 0.38±0.1 Wm-2 for the Earth’s surface. However, observed changes of GOHC have significant interannual to decadal variability associated with them, and this could mean that this variability may prevent detection of long-term trends. When time series of oceanic parameters are considered, linear trends are often computed to quantify the observed long-term changes. However, this does not imply that the original signal is best represented by a linear increase in time. To analyze the temporal evolution of GOHC time series is hence an important target to quantify significant interannual to decadal variability to in turn deliver reliable interpretation of global ocean changes.

Open questions concerning the estimation of GOHC are related to several sources of uncertainties. Among them, unknown deep ocean changes are a central issue. Physical long-term state estimations of the global ocean are limited to the upper 700 m of the global ocean. Extending the estimations down to 2000m using Argo (von Schuckmann et al., 2009, 2011) indicates that substantial warming may be taking place below the upper 700m depth of the global ocean (Trenberth, 2010). For an accurate estimation of GOHC, it is important to include its contributions from the deep ocean which are significant (Purkey and Johnson, 2010; Kouketsu et al., 2011), even if not dominant, and expected to grow with time as the abyssal ocean shifts (Wunsch et al., 2007). Analyses of observational surveys have shown significant deep ocean warming (Fahrbach et al. 2004; Johnson et al., 2007, 2008a, 2008b; Meredith et al., 2008; Böning et al., 2008;  Leuliette and Miller, 2009;  Jacobs and Giulivi, 2010; Masuda et al., 2010; Sutton and Roemmich, 2011), which are accompanied by changes of the general circulation system (Gille, 2008; Song and Colberg, 2011). In particular, Purkey and Johnson (2010) first quantify observed deep ocean temperature trends between the 1990s and 2000s. Warming in large areas of the global ocean accounts for a statistically significant fraction of the present global energy and sea level budgets, i.e. up to one third of those in the upper layer (Kouketsu et al., 2011; Song and Colberg, 2011). The depth distribution of warming is very useful for aiding the development of ocean climate models (Hansen et al., 2011). Sampling the deep ocean would provide substantial improvement in our ability to constrain the Earth’s radiative imbalance at decadal scales (Palmer et al., 2011). ## 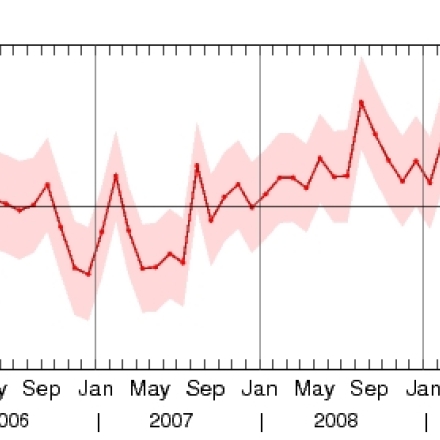 Ocean heat content for 10-1500m depth based on Argo

Pages with expert guidance by Dr. Karina von Schuckmann at the Mediterranean Institute of Oceanography (MIO), France.
Ocean heat content for 10-1500m depth based on Argo