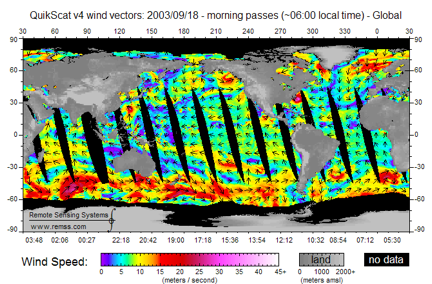 The QuikSCAT mission was intended to obtain sea-surface wind speed and direction data under all weather and cloud conditions over Earth's oceans. SeaWinds, an active radar scatterometer, is the main instrument on the QuikSCAT satellite. The microwave backscatter measured by SeaWinds is dependent on the surface roughness of the ocean, which in turn is related to wind stress. QuikSCAT data provide high spatial and temporal resolution, near global coverage and extensive validation. Some limitations include the prescence of rain-contaminated measurements, uneven daily sampling, and the short temporal record. QuikSCAT, launched in June 1999, remained fully operational until November 2009 when the primary instrument (SeaWinds) antenna stopped rotating due to a mechanical failure of the antenna spin mechanism. (The RapidSCAT instrument aboard the space station is planned to provide a replacement for QuikSCAT beginning in 2014... more info).

Level 3 gridded data are distributed by Remote Sensing Systems at daily, 3-day and monthly resolution on a 0.25 degree grid. A separate team at the Jet Propulsion Laboratory has processed a gridded product on a 1-degree grid for the obs4MIPS project.

Near-global coverage of the oceans at high spatial resolution

Rain affects the measurements, although rain-contaminated pixels are flagged

Due to the satellite sampling interval, daily averages are not strictly comparable to numerical model output

The following was contributed by Lucrezia Ricciardulli of Remote Sensing Systems, August, 2013:

The NASA scatterometer QuikSCAT operated from June 1999 until Nov 2009 and provided accurate satellite measurements of ocean surface wind speed and direction. QuikSCAT swath has a width of 1800 Km, and covers 90% of the global ocean surface in a day, with 14 orbits per day.

Scatterometers are active instruments, which emit microwave (MW) radiation towards the Earth and measure the signal backscattered by the ocean surface. The backscattered signal depends on the ocean surface roughness (related to wind stress). By combining multiple scatterometer views at any specific location over the Earth it is possible to retrieve the ocean surface wind speed and direction for that location, averaged over the scatterometer footprint size (10-50 km). The wind vector retrievals are produced by inverting a semi-empirical Geophysical Model Function (GMF) which relates the backscatter signal to 10m wind speed, wind direction relative to the scatterometer azimuth angle, scatterometer Earth incidence angle, MW signal polarization, and frequency. The inverted GMF provides 2 to 4 possible wind direction solutions; the most likely solution is selected by using an ambiguity removal algorithm, typically based on a MLE (Maximum Likelihood Estimator).

For QuikSCAT, more than one dataset is available to the scientific community. They are produced by different institutions for different purposes, often using different GMFs, ambiguity removal methods, and quality control (i.e. a Near-Real-Time operational product for weather forecasts or data assimilation, or a delayed but more quality-controlled product for climate research).

The operational QuikSCAT product was produced by Freilich and Vanhoff at NASA JPL, using a GMF named QSCAT1. This product is archived as swath or gridded data at PO.DAAC.

Despite the end of the QuikSCAT mission in 2009, the complete QuikSCAT dataset has been recently reprocessed at RSS in order to improve wind retrievals at high winds. When the algorithm for the original RSS QuikSCAT GMF (Ku-2001) was developed (Wentz and Smith, 1999), there was limited knowledge about what ground truth to use for calibrating high wind speeds above 20 m/s. A new GMF named Ku-2011 (Ricciardulli and Wentz, 2011a) has been recently developed by using 7 years of QuikSCAT backscatter measurements calibrated with the WindSat radiometer wind retrievals, which are considered to be accurate at least up to 30 m/s, even in rain (Meissner and Wentz, 2009).

The reprocessed RSS QuikSCAT V4 ocean vector wind retrievals were released in April 2011. The main motivations for the reprocessing were to strive for high-quality QuikSCAT retrievals at all wind regimes and to use the 10-yr QuikSCAT dataset as a calibration standard for climate-quality ocean surface wind speed retrievals from other satellite measurements. The new GMF Ku-2011 was also used in the newly reprocessed JPL QuikSCAT V3.

The complete dataset, from June 1999 to November 2009, is available as swath (L2B) and gridded data (L3). The files include retrievals of wind speed and direction over the global oceans, in ice-free regions. Data are written in binary form. FORTRAN, IDL, and MatLab routines to read the data are provided.

Data and reading routines are available via ftp   ftp://ftp.ssmi.com/qscat/bmaps_v04/.

Data can be browsed and downloaded at http://www.remss.com/qscat/qscat_browse.html, where a detailed description of the QuikSCAT dataset is also provided.  User support can be reached at support@remss.com.

The swath data, also known as orbital files, consists of single-orbit files of wind retrievals (wind speed, wind direction, quality flags, radiometer colocated rain, time of observation and additional ancillary information about the retrievals), with data organized into wind vector cells, 76 across the orbit and 1624 rows of cells along the orbit. The full mission is covered by 54000 swath files.

The gridded data, also called bytemaps, consist of daily gridded global maps at 0.25 deg resolution. Each daily file contains a map for ascending passes of the 14 daily orbits, and one for the descending ones. We keep the passes separated to avoid averaging over a time window of 12 hours. For adjacent orbits overlapping at high latitudes or at the beginning/end of the day, early retrievals are overwritten with later ones; i.e. they are not averaged over different orbits. Each daily map has data gaps in between the orbits (Figure 1). Additionally, small data gaps might be present at times due to bad quality or missing data due to the sensor being temporarily turned off. Gridded data are encoded in single byte values. Each data file contains a sequence of byte maps, each representing the Earth at quarter degree resolution, 1440 x 720 bytes. In addition to the wind speed and direction at each grid point, the files include a scatterometer rain-flag, a colocated radiometer rain measurement (when available), and the time of the observation.

In addition to daily gridded maps, RSS also provides 3-day, weekly, and monthly average gridded maps, at 0.25 resolution. For these composite maps, the observations are averaged over time and over different orbits. Some data gaps might still be present in 3-day averages, and occasionally even in weekly and monthly maps.

Scientists should use the rain-flag and radiometer rain rates to help remove rain effects from the data files when using the data for research. The most common mistake is not to flag the rain-contaminated data. Another common mistake is to compare global averages from the monthly composites to global averages from a model. Due to the satellite sampling, a monthly average from satellite data refers only to the location and time observed by the sensor; therefore systematic differences of a few tenths of one m/s compared to monthly maps from numerical models are not unexpected. Figure 2 illustrates the monthly wind timeseries for QuikSCAT compared to NCEP data, for the global ocean or properly colocated with QuikSCAT at the swath level. If the QuikSCAT data are used for climate research and trend comparisons with other datasets, the comparison dataset has to be colocated within few hours to the QuikSCAT measurements. For this purpose we advise using the swath data and applying the quality flags at the highest level (rain-flags and retrieval quality). We do not recommend using the time composites (weekly-monthly gridded maps) for climate research, as they were created without applying strict quality checks and rain-flagging.

An extensive validation of the RSS QuikSCAT V4 wind data has been performed, by comparing the QuikSCAT retrievals to in situ measurements (buoys, aircraft), other satellite retrievals, and output from numerical weather models and data assimilation models (Ricciardulli and Wentz, 2011a; Ricciardulli and Wentz, 2011b). The wind speed uncertainty for rain-free retrievals, expressed as standard deviation of the individual satellite measurements within 30 minutes of buoy measurements, is about 0.9 m/s, without any bias. The wind speed uncertainty decreases to less than 0.1 m/s when data are averaged globally and at a monthly time scale. The wind direction RMS for moderate to high winds (above 6 m/s) is about 10 degrees. At lower wind speeds, the wind direction uncertainty increases up to 20-30 degrees.

Another characterization of uncertainty is related to the MLE estimator, and is provided in the swath data files at each wind vector cell. The quantity provided is a normalized rms after-the-fit residual of the observation minus model backscatter. Large residual values indicate the observations did not fit the geophysical model function, and when aiming at high-quality measurements with high values of MLE should be discarded.

There are no corrections applied to this dataset.

Stability of the 10-yr temporal record

Scatterometers as QuikSCAT are active instruments, and they are inherently stable sensors in that they measure a ratio (backscattered radiation versus transmitted radiation) as compared to measuring as absolute quantity. For this reason scatterometer timeseries are not usually affected by satellite drifts or issues that affect the temporal stability of the time series. 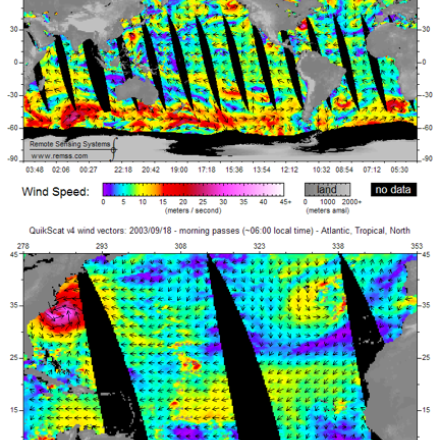 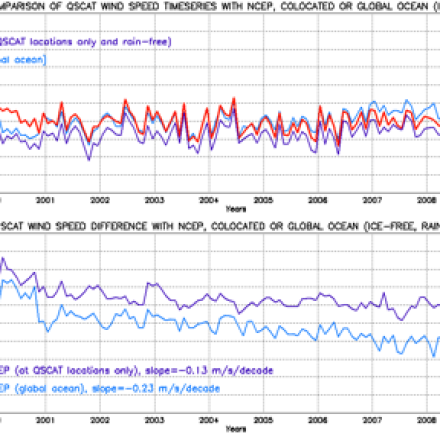 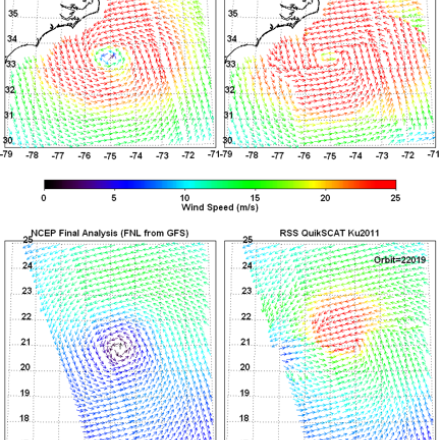 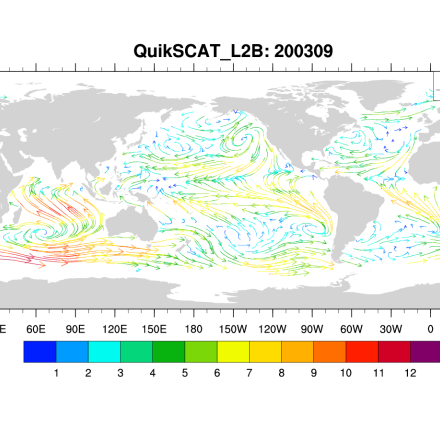 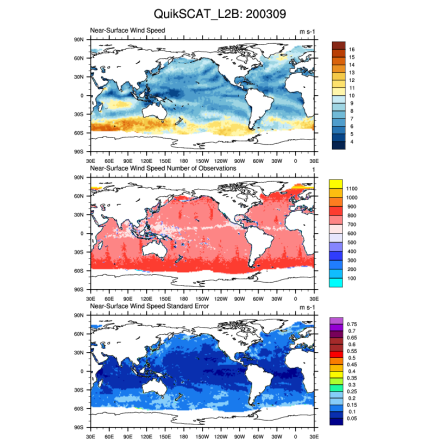