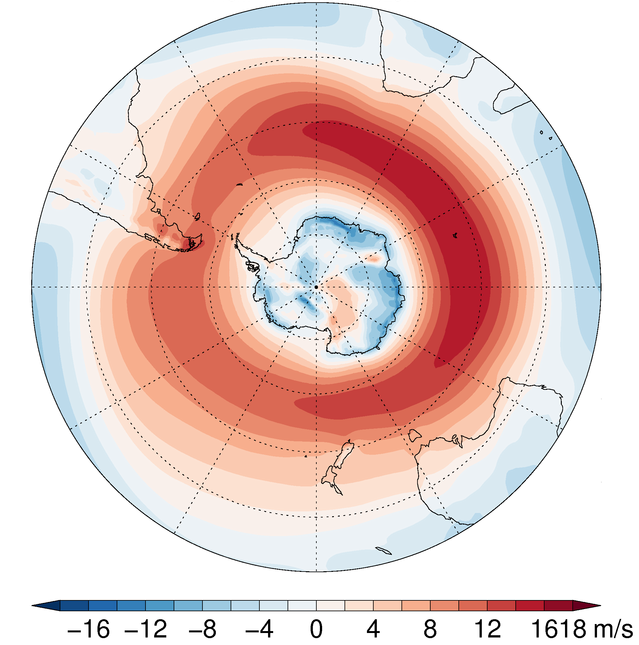 The dynamics of the Southern Hemisphere westerly jet are described in terms of two indices, jet strength and jet latitude.  Here, these indices are defined using the ERA-Interim reanalysis, although other datasets, including climate models, could be used.  Although closely linked with the Southern Annular Mode (SAM) Index, these indices more precisely capture the dynamics of the jet, and may be associated with differing impacts on Antarctic sea ice and other components of the Southern Hemisphere climate system.

Provides a broad dynamical characterisation of the westerly jet that divides the system into two components that can have differing drivers and impacts.

A dependence on the availability of reliable gridded atmospheric analyses or reanalyses and thus limiting the scope for deriving reliable time series prior to the post-1979 modern satellite era.

Even in the post-1979 modern satellite era, reanalysis trends can be spurious and should therefore be treated with caution.

A major feature of atmospheric circulation across the globe is a circumpolar maximum in time-mean lower-tropospheric westerly winds at mid-to-high southern latitudes (positioned on average slightly south of 50°S). Due to the near-uninterrupted presence of this belt of westerlies across all longitudes it can broadly be characterised as a zonal mean westerly jet, with jet strength defined as the maximum in zonal mean westerlies and jet latitude as the latitude of this maximum. Variability and trends in the westerly jet are strongly linked to the Southern Annular Mode (SAM), whereby both poleward shifts and strengthening are associated with more positive indices of the SAM (Swart et al. 2015).

The strong interactions between the westerly jet and other components of the Southern Hemisphere climate system have been exemplified by the recent summer-season poleward shifting and strengthening of the westerly jet in associated with the formation of the stratospheric ozone hole over Antarctica ((Thompson and Solomon 2002; Shindell and Schmidt 2004)). These changes appear to have had profound impacts on Southern Ocean sea-surface temperatures and Antarctic sea ice (Waugh et al. 2013; Purich et al. 2016), although the precise nature of these impacts remains a topic of much discussion in the literature due to complexities such as possible contrasts between shorter (sub-decadal) and longer (decadal to multi-decadal) timescale responses of the ocean/sea-ice system (Ferreira et al. 2015).

Although post-1979 trends in the SH mid-latitude circulation project strongly onto the SAM, westerly jet diagnostics may provide further dynamical insight. For example modelling studies have found that some drivers lead to contrasting responses in jet latitude compared to jet strength (McGraw and Barnes 2016; Baker et al. 2017), which can in turn have differing impacts on other components of the SH climate system (Bracegirdle et al. in press).

The westerly jet indices of latitude and strength are here derived from the European Centre for Medium-Range Weather Forecasts (ECMWF) Interim Reanalysis (ERA-Interim; Dee et al. (2011)). ERA-Interim has been found in a number of studies to be one of the most reliable global re-analyses in terms of representing circulation patterns and trends at high Southern latitudes (e.g. Bromwich et al. 2011; Bracegirdle and Marshall 2012). The method for calculating the jet indices broadly follows previous studies (e.g. Kidston and Gerber 2010; Son et al. 2010; Swart and Fyfe 2012) whereby, as described above, the strength and latitude of the westerly jet are identified in zonally-averaged lower-tropospheric (or near-surface) time-mean westerly wind or surface wind stress. The specific approach used here follows that of (Bracegirdle et al. in press), who calculate jet diagnostics from latitudinally-interpolated zonal mean westerly wind on the 850 hPa level (U850) between the latitudes of 75°S and 10°S. The main reason for choosing 850 hPa is that it captures the lower-tropospheric jet whilst also avoiding uncertainties associated with reanalysis estimates of wind in the atmospheric boundary layer (Kent et al. 2012), therefore allowing for more direct model-observation comparisons.

The above method is applied to seasonal means in U850 for each year between 1980 and the most recent complete year. This time period is used because ERA-Interim is available from January 1979 and December 1979 is required for the austral summer of 1980 (December 1979 through February 1980). Although other re-analyses extend further back to before the start of the modern satellite era in late 1978, the sparse in-situ observational network at high southern latitudes means that reanalysis datasets are much less reliable before this time (e.g. Bromwich and Fogt 2004). However even for linear trends in westerly jet diagnostics over the modern satellite era (post 1979), Swart et al. (2015) revealed a large inter-reanalysis uncertainty in westerly jet trends derived from six different reanalysis datasets and found that only in summer (DJF) were poleward shifting and strengthening trends consistent in sign across the re-analyses. Therefore trends over the length of the record should be treated with caution and are potentially spurious due to factors such as transitions between satellite platforms and changing in-situ data coverage.## 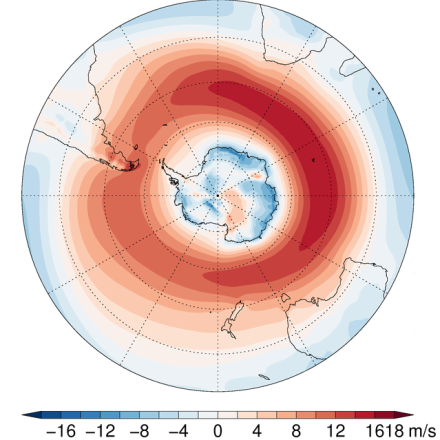