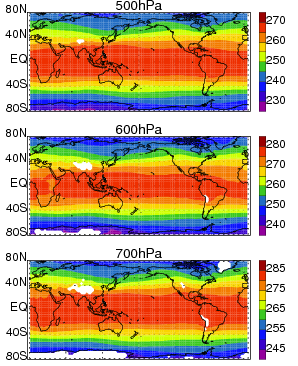 The Atmospheric Infrared Sounder (AIRS) project has generated decadal-length,
global, gridded data sets of temperature and specific humidity for several standard
levels in the troposphere for the obs4MIPS project. This obs4MIPS version of the
AIRS data are available at monthly resolution, 1ºx1º grids and formatted to
facilitate easier comparisons with CMIP5 model output. The gridded data are based on
the combined retrievals from AIRS, an instrument sensitive to infrared radiation
emitted from the surface and atmosphere, and the Advanced Microwave Sounding Unit (AMSU), an
instrument sensitive to microwave frequencies that facilitates retrievals even in
somewhat cloudy conditions. Both AIRS and AMSU are onboard NASA's AQUA platform.
Other AIRS Data including tropospheric temperature, specific humidity, relative
humidity, cloud amount, cloud top, and trace gases (CO, O3, and CO2) are also
available at either Level 2 swaths or Level 3 1ºx1º grids and several temporal
resolutions (daily, 8-day, monthly).

The following was contributed by Baijun Tian (NASA-JPL), December, 2012:

As part of the Obs4MIPs project, the AIRS project has generated two new AIRS datasets for CMIP5 model evaluation including the monthly mean tropospheric air temperature (K) and specific humidity (kg/kg) profile products from the standard AIRS V5 L3 monthly mean tropospheric air temperature and specific humidity products through interpolation and extrapolation of specific humidity from layers to levels and simple arithmetic means of the daytime and nighttime monthly means. These two AIRS datasets are provided for each calendar month from September 2002 to May 2011, on a global spatial grid at 1°-longitude by 1°-latitude resolution (the same spatial grid from the AIRS V5 L3), and on the 8 CMIP5 mandatory vertical pressure levels (1000, 925, 850, 700, 600, 500, 400, and 300 hPa).

There are several caveats that distinguish these AIRS tropospheric air temperature and specific humidity products from those climate model output counterparts.

There is a spurious cooling trend of about 0.05 K/year in the troposphere for Version 5 AIRS air temperature retrievals. This is suspected to come from incorrect handling of rising atmospheric CO2 levels, and will be reduced in the next version release (V6) of AIRS data.

Because the Aqua satellite is in a Sun-synchronous polar orbit, the diurnal sampling increases from the Equator to the poles, with the sampling in the polar regions at all times of day and night. Thus, the data sampling is much higher in the regions near the poles (~70–83° latitudes) than at lower latitudes. Sampling is as frequent as eight times daily at these high latitudes. However, as discussed above, regions poleward of 85° latitudes are viewed obliquely and the AIRS data there have low sampling rates.

AIRS went into a safe mode at the end of October 2003 to avoid possible damage from a large solar flare, and did not resume operations until mid-November 2003. Our preparation of these two AIRS products for CMIP5 model evaluation added a requirement of a minimum number of observations (twenty) per month for each grid square from each of ascending and descending orbits. With only a half-month of data in November 2003, many grid cells do not meet this criterion of twenty samples per cell per month. Cells filled during November 2003 include only the first half of the month, leading to a potential bias. A similar safe mode event occurred from January 9–29, 2010. As a result, the January 2010 product has about one third the data of a full month; it too could have a slight bias. 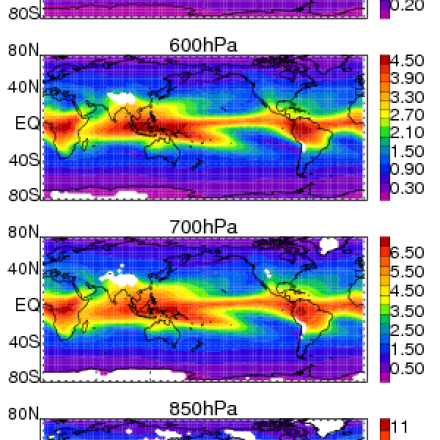 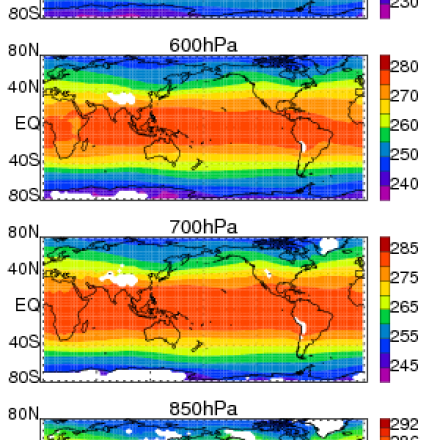