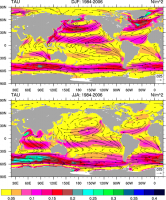 The Coordinated Ocean Research Experiments version 2  (COREv2) data set consists of a globally complete set of air-sea fluxes of momentum, heat and freshwater for 1948-2009 at monthly resolution.  This data set serves as a set of common atmospheric boundary conditions that has been used by the ocean modeling community to force and compare a diverse set of coupled ocean-sea ice models.  The primary data source is the NCEP/NCAR R1 reanalysis product.  To reduce climatological biases in COREv2,  the main NCEP/NCAR R1 fields used to compute the turbulent air-sea fluxes have been bias corrected on the basis of comparison with more reliable satellite and in-situ data.  Satellite-based radiation data and blended satellite-gauge precipitation data are used in place of the reanalysis data for 1984-2009 and 1979-2009, respectively.  Prior to the satellite era, COREv2 does not contain realistic time-varying radiation and precipitation fluxes.  Another disadvantage of COREv2 is that there are no estimates of uncertainties.

Contains a globally complete set of air-sea momentum, heat and freshwater fluxes for 1948-2009 at monthly resolution

The following was contributed by Dr. Stephen Yeager, November, 2015:

This data set constitutes a complete set of global air-sea heat and freshwater flux components from 1948 through 2009 at monthly resolution. The atmospheric data set used is a combination of state fields from atmospheric reanalysis and satellite-derived flux measurements that is referred to as "COREv2"--Coordinated Ocean-ice Reference Experiments data set, version 2 (Large and Yeager 2009, hereafter LY09). COREs are coordinated model intercomparison efforts undertaken by the international ocean and sea ice modelling communities in which a diverse set of coupled ocean--sea-ice models are forced with common atmospheric boundary conditions (Griffies et al. 2009). The COREv2 atmospheric data set documented in LY09 is based primarily on surface fields from the NCEP/NCAR R1 reanalysis product (referred to hereafter as NCEP) that are available from 1948 to present, but it incorporates satellite and in situ measurements to either adjust or replace certain NCEP fields deemed unreliable. As documented in Large and Yeager (2004) and later in LY09, a key motivation for generating the COREv2 atmospheric data set is to provide a full suite of best-available, historical boundary conditions for ocean and sea-ice modelling studies. The COREv2 data set has been promoted and disseminated by the CLIVAR Ocean Model Development Panel (http://www.clivar.org/clivar-panels/omdp/core) for coordinated studies (e.g., Danabasoglu et al. 2014) that are collected in a virtual special issue of the journal Ocean Modelling (http://www.journals.elsevier.com/ocean-modelling/news/core-ii-virtual-special-issue/). The COREv2 data and release notes can be downloaded from a server at the NOAA Geophysical Fluid Dynamics Laboratory (GFDL; http://data1.gfdl.noaa.gov/nomads/forms/core/COREv2.html).

In COREv2, NCEP surface radiation is replaced with daily surface downwelling longwave and shortwave radiative fluxes from the GISS ISCCP-FD data set (Zhang et al. 2004) that spans 1984-2009. NCEP precipitation is discarded in favor of a blended product (spanning 1979-2009) that combines GPCP (Global Precipitation Climatology Project; http://precip.gsfc.nasa.gov/), CMAP (Climate Prediction Center Merged Analysis of Precipitation; http://www.esrl.noaa.gov/psd/data/gridded/data.cmap.html), and monthly climatology over the Arctic (see LY09 for details). Other atmospheric state fields required for computing turbulent air-sea fluxes (i.e., near surface wind, potential temperature, specific humidity, and density) come from NCEP, but with adjustments applied to reduce climatological biases. The biases (and corresponding adjustments) are determined by comparing with more reliable satellite or in situ measurements that themselves are too regional or short in duration to serve as forcing data for historical ocean--sea-ice simulations. As implied above, not all of the data streams in COREv2 are available over the full 1948-2009 time period; climatological fill is used to fill in missing years (see LY09 for details). The COREv2 release notes also describe the historical continental freshwater discharge data set (based on Dai et al. 2009) that is incorporated as an ocean forcing field. Although not strictly an air-sea flux, this runoff flux is included in the COREv2 flux data set for completeness.

While COREv2 was developed for the purpose of forcing prognostic ocean and sea ice models, it can alternatively be "coupled" to observed, historical ocean and sea ice fields through bulk formulae to yield an estimation of historical air-sea fluxes. That is the procedure used to generate this COREv2 flux data set.

From the perspective of ocean modelling, a key advantage of the COREv2 boundary conditions is that, when coupled to observed SST as outlined above, they yield a globally-averaged, climatological (1984-2006) air-sea heat flux of only 1.6 W/m^2. This relatively small heat imbalance, which LY09 argue is largely consistent with available estimates of long-term ocean warming, allows for long integrations over multiple forcing cycles with minimal ocean drift (assuming the model is capable of accurate simulation of observed SST and sea ice). The widespread use of COREv2 in the ocean modelling community makes this a natural companion flux data set to use for evaluating model fluxes. The fidelity of COREv2 fluxes cannot easily be ascertained, but LY09 show that they imply oceanic heat and freshwater transports that are compatible with direct observations and they compare favorably with other air-sea flux products (see Valdivieso et al. 2015). On obvious disadvantage of COREv2 fluxes is the lack of realistically varying precipitation and radiation fluxes prior to the satellite era. COREv2 will probably exhibit less agreement with in situ buoy measurements than products like OAFlux (Yu and Weller, 2007) that use these data in a more systematic way to constrain fluxes. Finally, another drawback of the COREv2 flux data set is the lack of error estimates, because these are likely to be substantial. Flux comparison papers like Valdivieso et al. (2015) give a sense of the uncertainties inherent to air-sea flux estimation. 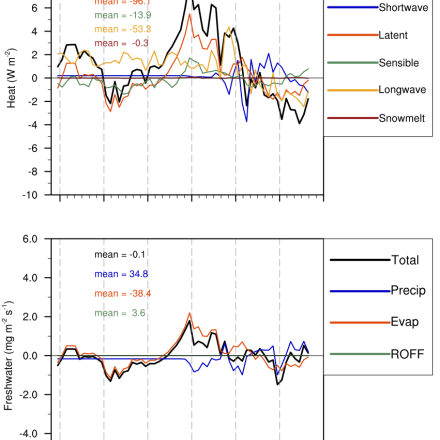 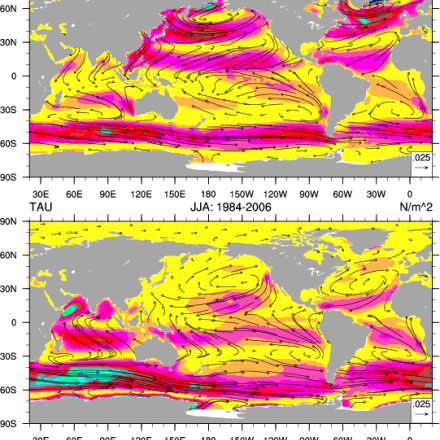 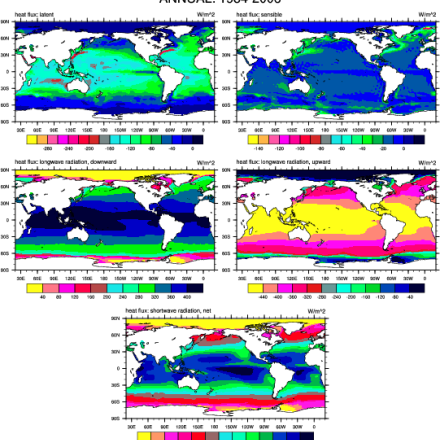 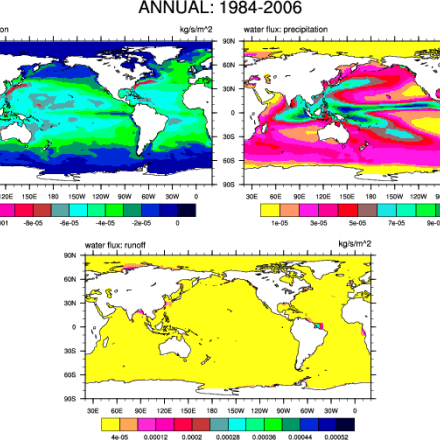