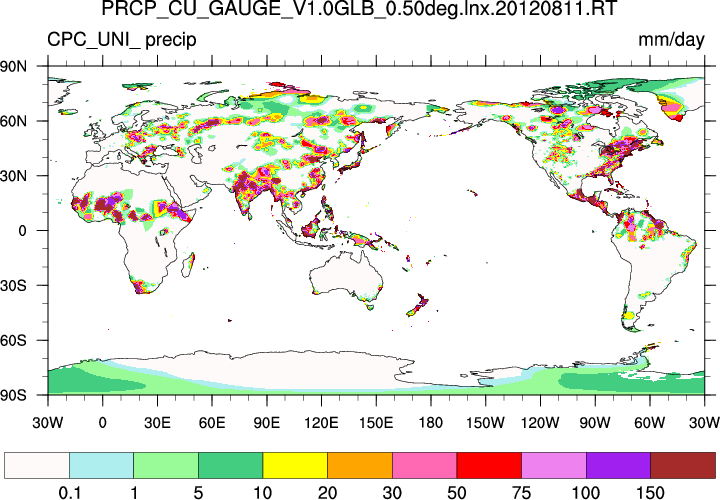 A gauge-based analysis of daily precipitation has been constructed over the global land areas. Gauge reports from over 30,000 stations are collected from multiple sources including GTS, COOP, and other national and international agencies. Quality control is performed through comparisons with historical records and independent information from measurements at nearby stations, concurrent radar / satellite observations, as well as numerical model forecasts. Quality controlled station reports are then interpolated to create analyzed fields of daily precipitation with consideration of orographic effects (Xie et al. 2007). The daily analysis is constructed on a 0.125 degree lat/lon grid over the entire global land areas, and released on a 0.5 degree lat/lon grid over the global domain for a period from 1979 to the present. [source Xie, 2010] This dataset has two components: (a) the "retrospective version" which uses 30K stations and spans 1979-2005 and (b) the "real-time version" which uses 17K stations and spans 2006-present. The real-time data will be reprocessed in the future to be consistent with the retrospective analysis.

Quality of the gauge-based analysis is poor over tropical Africa and Antarctica.

The analysis quality varies with the gauge network density.

Definition of the ending time for the daily accumulation differs from country to country. There might be discontinuity in the analyzed fields across the national boundaies 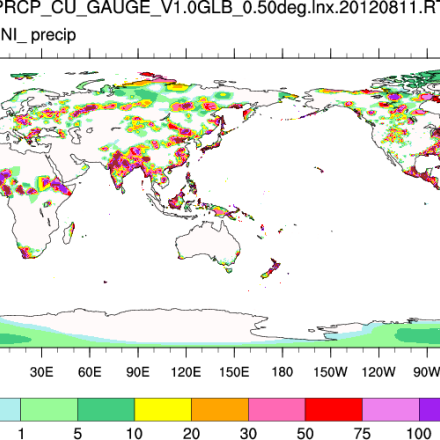