Numerous uncertainties as a result of different methods, assumptions, and data sources

Major limitations in the spatial and temporal coverage of sea ice thickness, which prevent a consistent record of long-term change and variability

Methods for assessing snow depth on top of the sea ice (i.e. use of climatology) may lead to biases in sea ice thickness estimates

The following was contributed by Zachary Labe (University of California, Irvine), August, 2017:

Through these various observational data sets and methodological assumptions, sea ice thickness remains one of the more poorly observed variables in the Arctic. Sources of error and uncertainty include: freeboard measurements, snow depth, and density estimates for sea ice and snow (Zygmuntowska et al., 2014). Most satellite sea ice thickness data is not available during the melt season due to the formation of melt ponds.

As a result of the limited temporal and spatial estimates of sea ice thickness, ice-ocean models with data assimilation are also a useful tool in providing sea ice thickness “reanalysis.” The Pan-Arctic Ice-Ocean Modeling and Assimilation System (PIOMAS) is a coupled ice and ocean model with sea ice thickness data available over the satellite era (from 1979) (Zhang and Rothrock , 2003). PIOMAS has been widely validated against sea ice thickness data sets (such as ICESat), and its uncertainties are addressed in Schweiger et al.(2011). PIOMAS has the capabilities of assimilating sea surface temperatures, sea ice concentration, and sea ice velocity data. The model is driven by atmospheric surface forcings from daily mean NCEP-NCAR (R1) reanalysis.

The following list of data sets and links provide a starting point for using sea ice thickness data. Particularly, the “Unified Sea Ice Thickness Climate Data Record” is a comprehensive archive of various sea ice thickness observational data sets, which are available at a 50 km resolution from 1947 to 2017 (Lindsay, 2010). The archive identifies each data set type along with any associated uncertainty statistics and additional concise documentation.

The use of these data sets requires an understanding of the documentation and potential sources of error. For example, estimates of snow depth on the top of sea ice often use a climatology from Warren et al. (1999), which may not reflect the actual snow depth at the time of sea ice thickness estimation. Comparisons and validations between many of these sea ice thickness products can be found in recent studies (e.g., Stroeve et al., 2014; Wanget al., 2016).## 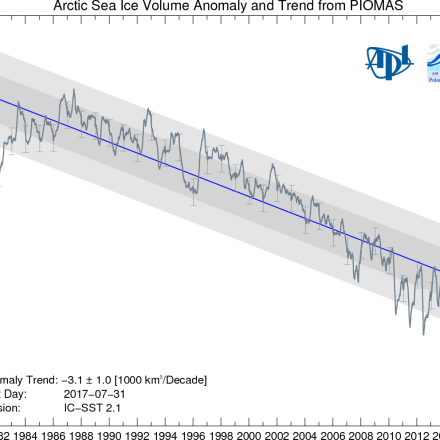 Sea ice volume anomalies in PIOMAS (Zhang and Rothrock , 2003) calculated from a 1979 to 2016 baseline. The linear trend is shown in blue. The shaded areas are highlighted for one and two standard deviations from the trend. Figure by the Polar Science Center at the University of Washington. (provided by Z Labe) 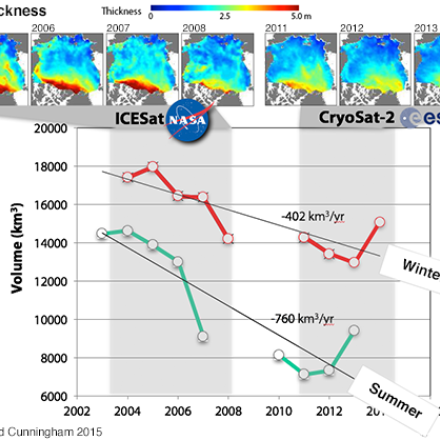 Winter Arctic sea ice thickness in ICESat (2004-2008) and CryoSat-2 (2011-2014) [top]. Sea ice volume in winter and summer along with corresponding trends for ICESat and CryoSat-2 [bottom]. Figure by Ron Kwok (Jet Propulsion Laboratory) and adapted from Kwok and Cunningham (2015). (provided by Z Labe)