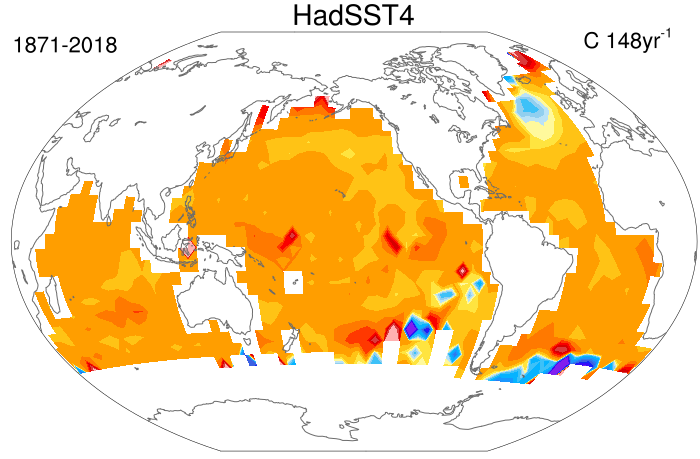 HadSST4 provides monthly SST anomalies on a 5°x5° grid for 1850-present. The anomalies are derived from a 30-year climatology spanning 1961-90. Coverage is global but there is no interpolation; Thus, missing data occur in the final product. This means that uncertainties due to limited spatial coverage and systematic errors are relatively easy to identify compared with interpolated SST products; it also minimizes the loss of variance in SST anomalies that occurs in interpolated products. The primary input data to HadSST4 are from ICOADS release 3.0. Bias adjustments to the ICOADS SSTs account for changes in measurement methods (e.g. engine room intake, bucket measurements, or buoy data). These adjustments are carried forward to the present. Uncertainties in these adjustments have complex spatial and temporal dependencies. The uncertainties are represented in an ensemble of 200 realizations of the data set. This allows the spatial and temporal characteristics of the uncertainties and their effects on climate signals to be explored. In addition to the ensemble, a median estimate is provided. Additional uncertainty arises from local measurement errors and local sampling errors; these errors are represented as gridded fields. Correlated measurement errors are represented in error-covariance matrices. Unadjusted raw data are provided but their use for climate studies is discouraged.

Long record, extending back to 1850 and up to present with regular updates

Quantification of systematic uncertainties (due to measurement methods) in space and time presented as a 200-member ensemble; bias adjustments extend up to the present. For ~2000 to present, HadSST4 in good agreement with trends in ERSSTv4/v5 and data from satellites, buoys, and floats

No interpolation so anomalies in a grid cell can be traced to original observations. Also, no loss of variance that often arises from statistical reconstruction and interpolation methods.

Uncertainty estimates can be difficult to use

The following was contributed by Dr. John Kennedy, in September, 2019:

HadSST.4.0.0.0 (the Hadley Centre Sea-Surface Temperature data set version 4, Kennedy et al. 2019) is a gridded data set of sea-surface temperature anomalies (that is, temperature difference from the 1961-1990 average) from January 1850 to December 2018. The monthly grids have a resolution of 5° latitude by 5° longitude. HadSST.4.0.0.0 is based on quality-controlled in situ measurements of sea-surface temperature from the International Comprehensive Ocean Atmosphere Data Set (ICOADS) release 3.0. It is updated using ship and moored buoy data from ICOADS release 3.0.1 and drifting buoy data provided by the Copernicus Marine Environment Monitoring Service. In situ measurements are those made at the surface by ships, drifting buoys and moored buoys. Ship measurements are made using a variety of methods and adjustments have been applied to the data to minimise the impact of artificial variability caused by changes in instrumentation. Uncertainties associated with bias adjustments, measurement errors and sampling error have been estimated and are provided with the data. Grid-box SST anomalies are only estimated in those grid boxes that contain observations. Consequently, the data set is not globally complete.

How useful are these data for characterizing means as well as extremes?

It depends on what you are doing. There are two main things to bear in mind.

First, there are gaps in the data and the gaps are not randomly-distributed in time. Early in the record and during the two World Wars, the coverage is very sparse. Some analyses have accounted for this by masking the model output to have a similar coverage to that of the observations.

The idea behind providing an ensemble was that it would be relatively easy to assess the sensitivity of an analysis to observational uncertainty by re-running the analysis on some, or all, of the observational ensemble. We very much welcome feedback from users on this general approach of using ensembles of observational data sets.

Probably. Although every effort has been made to minimise the effects of known changes in measurement methods, information concerning how measurements were made is limited. An attempt to quantify the uncertainty has made, but the period between 1935 and 1970 is particularly problematic as there were large, but poorly-documented changes in the way that measurements were made as well as discontinuities in the data sources used to form the ICOADS data base. It is recommended that users test their analyses using a range of long-term SST data sets in order to get a broader understanding of the uncertainties.

Data are available from https://www.metoffice.gov.uk/hadobs/hadsst4/data/download.html

How frequently are the data updated?

The data set is not currently being updated (it runs from January 1850 to December 2018), but monthly updates will commence in early 2020 typically with a two week lag.## 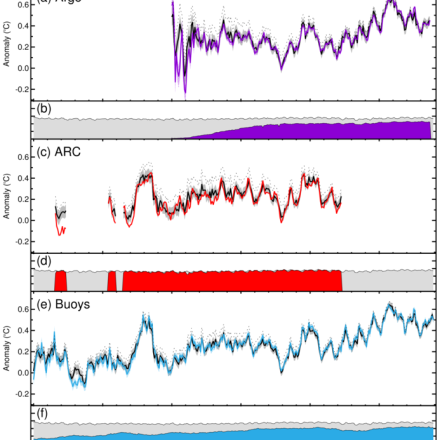 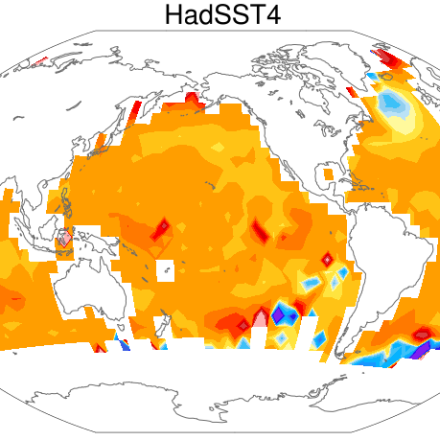 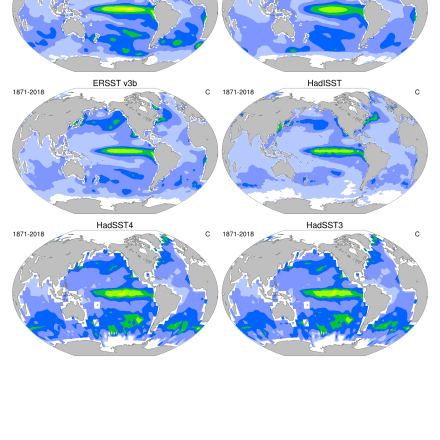 intyerannual standard deviation of SST in DJF in 6 different SST datasets; HadSST4 is on the lower left(created with NCAR Climate Variability Diagnostics Package)