The Atlantic Multi-decadal Oscillation (AMO) has been identified as a coherent mode of natural variability occurring in the North Atlantic Ocean with an estimated period of 60-80 years. It is based upon the average anomalies of sea surface temperatures (SST) in the North Atlantic basin, typically over 0-80N. To remove the climate change signal from the AMO index, users typically detrend the SST data at each gridpoint or detrend the spatially averaged timeseries. Trenberth and Shea (2006) recommend that the detrending be done by subtracting the global-mean SST anomaly timeseries from the spatially averaged timeseries. See the Expert Guidance by Dr. Kevin Trenberth for the rationale for the global-mean detrending approach. The Expert Guidance by Dr. Rong Zhang discusses the impacts and mechanisms of the AMO.

The SST-based AMO index does not directly capture aspects of the AMO related to coherent variations in salinity, subsurface temperature and ocean-driven turbulent heat fluxes

The following was contributed by Dr. Rong Zhang, March, 2016:

The observed large-scale multidecadal fluctuations in the Atlantic sea surface temperature (SST), has been referred to as the Atlantic Multidecadal Oscillation (AMO) (Kerr, 2000) to emphasize the “multidecadal” character of this oceanic phenomenon and to distinguish it from the inter-annual variability associated with the atmospheric North Atlantic Oscillation (NAO) (Enfield et al. 2001). The AMO index is defined as an area average of detrended low-pass filtered North Atlantic SST anomalies to reflect the Atlantic low frequency variability at time scales longer than a decade (Enfield et al., 2001; Sutton and Hodson, 2005; Knight et al 2005; Ruiz-Barradas et al., 2013).

The AMO pattern (Figure 2a) is derived by regressing detrended SST anomalies on the AMO index (Figure 1) (Sutton and Hodson, 2005; Knight et al., 2005; Ruiz-Barradas et al., 2013).  The positive AMO phase corresponds with positive SST anomalies over most of the North Atlantic, with stronger anomalies in the subpolar region and weaker anomalies in the tropics (Figure 2a). The warm AMO phases occurred during the middle of the 20th century and the recent decades since 1995, and cold phases occurred during the early 20th century and during 1964-1995 (Figure 1). The monopolar AMO pattern associated with this multidecadal variability should be distinguished from the tripolar SST pattern induced by the NAO at the inter-annual time scale (Figure 2b), and hence the AMO pattern should not be derived by regressing on the detrended “unfiltered” North Atlantic basin averaged SST index (see Figure 2).

The AMO is often thought to be driven by the variability of the Atlantic Meridional Overturning Circulation (AMOC) (Kushnir, 1994; Delworth and Mann, 2000; Knight et al., 2005; Latif et al., 2006), although some have suggested that the AMO is mainly driven by changes in anthropogenic radiative forcing (Mann and Emanuel, 2006). Various approaches have been proposed for the quantitative attribution of the AMO to an anthropogenic radiatively forced part and a part arising from natural variability (Trenberth and Shea, 2006; Kravtsov and Spannagle, 2008; Ting et al. 2009; DelSole et al. 2011; Wu et al. 2011). Recently it has been suggested that anthropogenic aerosols are a prime driver of the AMO using climate model simulations incorporating aerosol indirect effects (Booth et al., 2012). However, there are major discrepancies between the simulations in Booth et al. (2012) and observations in the North Atlantic upper-ocean heat content, in the spatial pattern of multidecadal SST changes within and outside the North Atlantic, and in the subpolar North Atlantic sea surface salinity (SSS), due to overestimated aerosol indirect effects (Zhang et al. 2013). Besides, the aerosol effects cannot account for the observed anticorrelation between detrended multidecadal surface and subsurface temperature variations in the tropical North Atlantic. These discrepancies cast considerable doubt on the claim that aerosols drive the bulk of the AMO. On the other hand, independent AMOC fingerprints derived from the observed subsurface ocean temperature indicate that the past AMOC variations are coherent with the observed AMO (Zhang, 2007, 2008; Wang and Zhang, 2013), bringing more evidence that the observed AMO is linked to AMOC variations rather than merely a 20th century artifact of changes in radiative forcing.

The SST-based definition of the AMO index often leads to the incomplete understanding of the AMO only in terms of North Atlantic SST anomalies. In contrast, the AMO actually reflects coherent multivariate low frequency variability observed in the Atlantic, including correlated variations in the subpolar North Atlantic heat content, salt content, and ocean-driven surface turbulent heat fluxes, as well as anticorrelated variations in the tropical North Atlantic subsurface temperature (Zhang 2007, 2008; Wang et al. 2010, Robson et al. 2012; Zhang et al. 2013; Gulev et al. 2013; Wang and Zhang, 2013). Mechanisms proposed for the AMO have to account for the observed coherent multivariate low frequency variability in the Atlantic, in addition to the low frequency North Atlantic SST variations. It is crucial to use multivariate metrics to understand the mechanisms causing the AMO.##

The following was contributed by Dr. Kevin Trenberth, August, 2015: 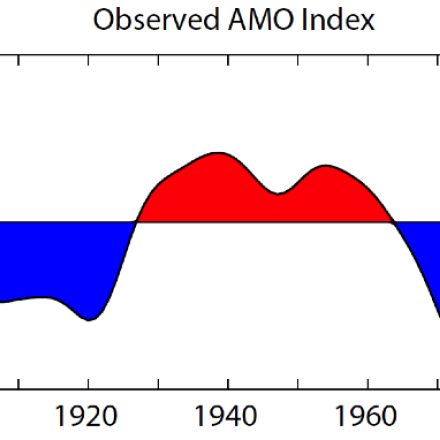 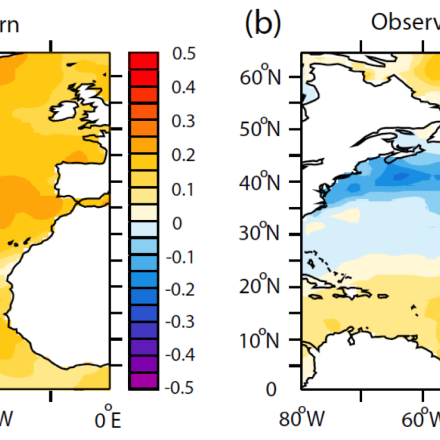 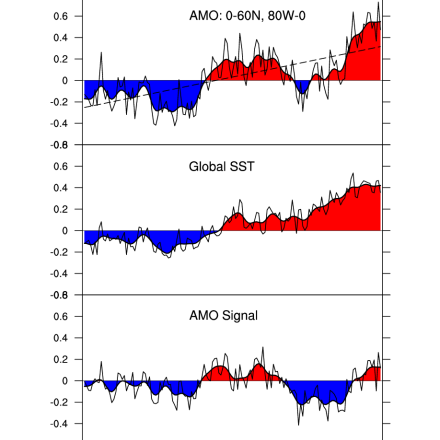