The Southern Oscillation Index (SOI) is a time series used to characterize the large scale sea level pressure (SLP) patterns in the tropical Pacific. Monthly mean SLP at Tahiti [T] and Darwin [D] are used. An optimal SOI can be constructed. It consists of  [T-D] which is a measure of the large scale phenomena while  [T+D] is a measure of small scale and/or transient phenomena that are not part of the large scale Southern Oscillation. The SOI is linked to large scale tropical SST variability and as such is a measure of the "SO" part of the ENSO phenomenon. Extended periods of negative SOI correspond with El Nino events, characterized by warm SSTs in the eastern and central tropical Pacific.  It has a period of 2-8 years.

SLP values for Tahiti prior to 1935 should be viewed with appropriate caution. Ropelewski and Jones (1987) discuss the issues. It is recommended that the  'Darwin only' version of the SOI be used for very long term studies. It is highly correllated with the (Tihiti-Darwin) record. An effort to extend the SOI series to prior than 1866 is discussed by Konnen et al (1998).

Simple to construct and understand

Raw monthly values are noisy; Must be smoothed

Tahiti values prior to 1935 should be used with appropriate caution.

The following was contributed by Dr. Kevin Trenbeth, August, 2015:

The analysis of teleconnections has typically employed a linear perspective, which assumes a basic spatial pattern with varying amplitude and mirror image positive and negative polarities. In the Northern Hemisphere, one-point correlation maps can be used to illustrate the Pacific-North American (PNA) pattern and the NAO.  Teleconnections are best defined over a grid, but simple indices based on a few key station locations remain attractive, as the series can often be carried back in time long before complete gridded fields are available; the disadvantage is increased noise from the reduced spatial sampling. Generally it is desirable to normalize the values so that each location has equal variance in the index, and to retain the seasonal cycle, an annual mean standard deviation is often best.

For several indices, two stations at opposite poles in the centers of action are used in combination to define the time series and associated pattern.  Examples are the Southern Oscillation Index, which uses sea level pressures at Darwin, Australia and Tahiti in the South Pacific, and the North Atlantic Oscillation, which uses Lisbon, Portugal and Stykkisholmur/Reykjavik, Iceland.  The NAO is primarily a north-south dipole in sea level pressure characterised by simultaneous out-of-phase pressure and height anomalies between temperate and high latitudes over the Atlantic sector, and therefore corresponds to changes in the westerlies across the North Atlantic into Europe.

Each station can obviously be affected by local storms and other phenomena, such as the Madden-Julian Oscillation for the tropics, and therefore station-based indices contain noise.  If the index S = TN –DN, (for example, S=SOI, and D and T refer to Darwin and Tahiti, and the subscript N means they are normalized), then a measure of the noise is N = TN + DN.   The ratio of the variance of the signal and noise time series provides a metric of how useful such a simple index is.  Tracking both signal and noise can also help the user from being led astray. ## 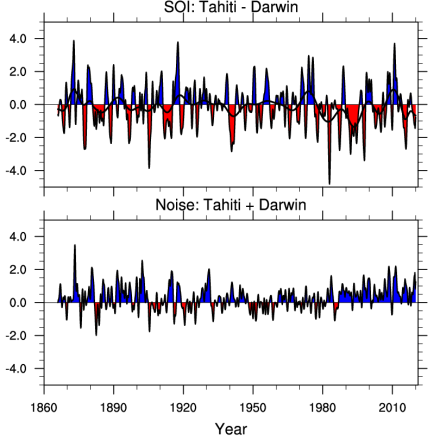 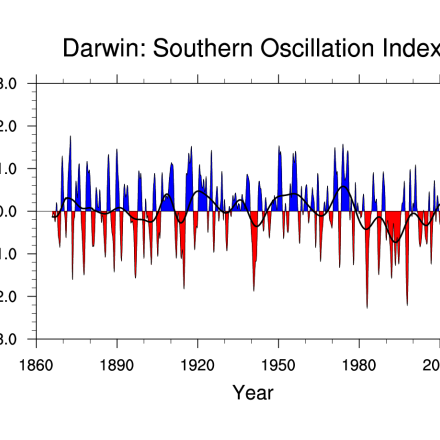 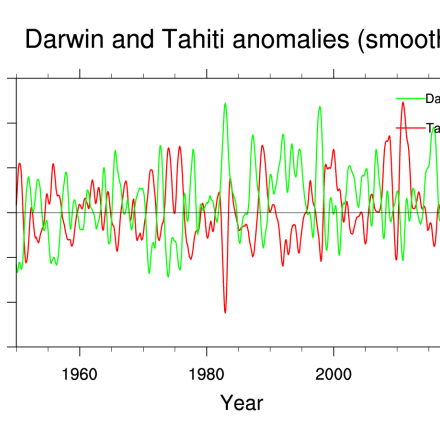 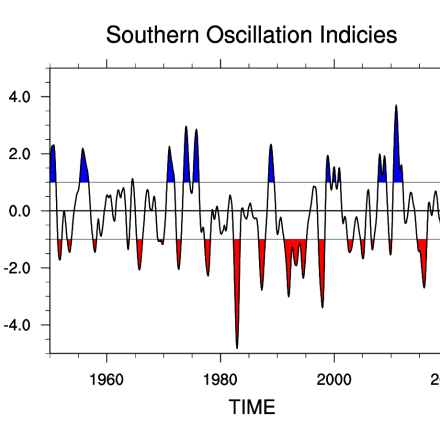