There are several indices used to monitor the tropical Pacific, all of which are based on SST anomalies averaged across a given region.  Usually the anomalies are computed relative to a base period of 30 years.  The Niño 3.4 index and the Oceanic Niño Index (ONI) are the most commonly used indices to define El Niño and La Niña events.  Other indices are used to help characterize the unique nature of each event. A discussion of El Niño and its impacts is provided in the Expert Guidance by Dr. Kevin Trenberth.

The numbers of the Niño 1,2,3, and 4 regions correspond with the labels assigned to ship tracks that crossed these regions.  Data from these tracks enabled the historic records of El Niño to be carried back in time to 1949, as discussed in a classic study by Rasmusson and Carpenter (1982).

Niño 1+2 (0-10S, 90W-80W):  The Niño 1+2 region is the smallest and eastern-most of the Niño SST regions, and corresponds with the region of coastal South America where El Niño was first recognized by the local populations.  This index tends to have the largest variance of the Niño SST indices.

Niño 3 (5N-5S, 150W-90W):  This region was once the primary focus for monitoring and predicting El Niño, but researchers later learned that the key region for coupled ocean-atmosphere interactions for ENSO lies further west (Trenberth, 1997).  Hence, the Niño 3.4 and ONI became favored for defining El Niño and La Niña events.

Niño 3.4 (5N-5S, 170W-120W):  The  Niño 3.4 anomalies may be thought of as representing the average equatorial SSTs across the Pacific from about the dateline to the South American coast.  The Niño 3.4 index typically uses a 5-month running mean, and El Niño or La  Niña events are defined when the  Niño 3.4 SSTs exceed +/- 0.4C for a period of six months or more.

ONI (5N-5S, 170W-120W): The ONI uses the same region as the Niño 3.4 index.  The ONI uses a 3-month running mean, and to be classified as a full-fledged El Niño or La Niña, the anomalies must exceed +0.5C or -0.5C for at least five consecutive months.  This is the operational definition used by NOAA.

Niño 4 (5N-5S, 160E-150W): The  Niño 4 index captures SST anomalies in the central equatorial Pacific.  This region tends to have less variance than the other Niño regions.

To define the unique character of each El Niño or La Niña event, Trenberth and Stepaniak (2001) argue that the Niño 3.4 index should be used in combination with an index that  they introduce, called the Trans-Niño Index (TNI).  The TNI is defined to be the difference in normalized SST anomalies between the Niño 1+2 and Niño 4 regions.  The TNI thus measures the gradient in SST anomalies between the central and eastern equatorial Pacific.  When the SST gradient is particularly large (say, due to positive anomalies in the Niño 4 region and negative anomalies in the Niño 1+2 region), some researchers classify the event as a "central Pacific El Niño " or "El  Niño Modoki," although the distinction of this type of event as a seperate phenonomenon is a matter or debate.

'Recipes' for computation of the Niño SST indices are given the the Technical Notes section of the Expert Guidance tab.

The following was contributed by Dr. Kevin Trenberth, NCAR, January, 2016.  These comments were originally published on The Conversation. Read the original article.

A major El Niño is under way now. It already has substantially influenced weather patterns around the globe, but could have even bigger impacts this winter. There have been only two “super” El Niños until now: in 1982-83 and 1997-98. We are now experiencing a third “super” El Niño.

Every El Niño cycle is different. The effects from this year’s already include a record number of hurricanes/typhoons in the Pacific and intense wildfires in Indonesia.

In the United States over the next several months, El Niño is expected to cause heavy rains across the South, with the potential for coastal flooding in California, along with relatively mild and dry weather in the northern states. Global climate change, which, along with the El Niño, is making 2015 the warmest year on record, is likely to amplify these impacts.

What is El Niño?

El Niños are not uncommon. Every three to seven years or so, the surface waters of the tropical Pacific Ocean become extremely warm from the International Dateline to the west coast of South America. This process causes changes in the local and regional ecology, and is clearly linked with abnormal global climate patterns.

Historically “El Niño” referred to the appearance of unusually warm water off the coast of Peru near Christmastime (Niño is Spanish and refers to “the boy Christ child”). Today it describes broader changes that occur across the Pacific basin.

Oceanic and atmospheric conditions in the tropical Pacific fluctuate somewhat irregularly between warm El Niño phases and cold phases in which surface waters cool across the tropical Pacific. These cooling events are called “La Niña” (“the girl” in Spanish). The most intense phase of each event typically lasts about a year.

El Niño is linked to major changes in the atmosphere known as the Southern Oscillation (SO). Scientists call the whole phenomenon the El Niño–Southern Oscillation (ENSO). During El Niño, higher-than-normal surface air pressures develop over Australia, Indonesia, Southeast Asia and the Philippines, producing drier conditions or even droughts. Dry conditions also prevail in Hawaii, parts of Africa, and northeastern Brazil and Colombia.

Lower pressures develop over the central and eastern Pacific, along the west coast of South America, parts of South America near Uruguay and southern parts of the United States in winter, often producing heavy rains and flooding. Regions that are typically dry during El Niño events tend to become excessively wet during La Nina events, and vice versa.

Why does El Niño happen?

ENSO is a natural phenomenon arising from coupled interactions between the atmosphere and the ocean in the tropical Pacific Ocean. Changing sea surface temperatures alter rainfall and surface winds, which in turn alter ocean currents and sea surface temperatures. These interactions produce a positive feedback loop, in which each change tends to promote further changes. There is good evidence from core samples taken from coral reefs and glacial ice in the Andes that ENSO has been going on for millennia.

During El Niño, trade winds that typically blow from east to west across the Pacific weaken. Sea level falls in the western Pacific and rises in the east by as much as a foot as warm waters surge eastward along the equator. The resulting increase in sea temperatures warms and moistens the overlying air. This triggers a process called convection: the warm, moist air rises into the atmosphere, altering normal rainfall patterns and associated releases of heat.

Somewhat like a rock sitting in a stream of water, this unusual heating sets up teleconnections: continental-scale waves in the atmosphere that extend into the midlatitudes in winter. These waves alter winds and change the jet stream and storm tracks, creating persistent weather patterns. The changes in sea surface temperatures associated with El Niño reach their most extreme point during winter in the Northern Hemisphere, so we see the biggest effects then.

Because Pacific surface waters are much warmer and atmospheric circulation patterns throughout the tropics are altered, fewer tropical storms and hurricanes than normal occur in the tropical Atlantic during El Niño. But there is much more activity than usual in the Pacific. Super Typhoon Pam, which ripped through Vanuatu in March 2015 causing enormous damage, was fueled by warm waters from El Niño.

During the northern Pacific hurricane season in the summer and fall of 2015, 25 category 4 and 5 hurricanes/typhoons developed, a record as compared to the previous record of 18. Changed weather patterns resulted in lack of rain and thus strong drought and wildfires in Indonesia that have degraded air quality over hundreds of miles.

El Niño has recently affected the Indian Ocean. The Bay of Bengal is already exceptionally warm, which has led to record-breaking rains and widespread flooding and devastation in Chennai, southeastern India, with 47 inches of rain in November and a further 11 inches of rain in the first week of December. This Indian Ocean activity may disrupt the expected development of El Niño patterns around the world. El Niño-related heavy rains have also recently (December 2015) occurred in the Americas: in Paraguay and surrounding areas, and in Missouri. The latter has led to considerable flooding of the Mississippi, reminiscent of the El Niño-related Mississippi flooding in 1993.

Sea surface temperature anomalies from El Niño tend to peak in December, and this year the changes may already have peaked in late November. However, the seasonal cycle further increases total sea surface temperatures, so the biggest impacts on the atmosphere often occur in the following February or March. This El Niño began in 2014, but stalled, and then regrouped in 2015. Every El Niño event is different, but according to NOAA’s latest monthly outlook, El Niño conditions are expected to peak during the winter of 2015-16 before gradually weakening through spring 2016 and terminating by late spring or early summer 2016.

During the coming months, climate scientists expect that El Niño will pull the east Pacific Northern Hemisphere jet stream and its associated storm track southward. Normally these storms veer to the north toward the Gulf of Alaska or enter North America near British Columbia and Washington, where they often link up with cold Arctic and Canadian air masses and bring them down into the United States. Instead, with the jet stream following an altered path, the northern states are likely to experience relatively mild and drier-than-normal weather. Storms tracking across the continent further to the south will likely create wet conditions in California and across the South as far east as Florida.

Each El Niño event has its own character. In the El Niño winters of 1992–93, 1994–95, 1997–98 and 2004-05, southern California was battered by storms and experienced flooding and coastal erosion. However, in more modest El Niños, including the 1986–87 and 1987–88 winters, California was more at risk from droughts. Given the scale of this year’s El Niño, Californians should prepare for heavy rains, possible flooding and heavy coastal erosion, driven by the combined effects of higher sea levels (driven by climate change and El Niño effects) and storm surges.

All of the impacts of El Niño are exacerbated by global warming. Globally, temperatures for 2015 are the highest on record, in part because of the El Niño event. Global warming sets the background and El Niño determines regional weather patterns. When they work together in the same direction, they have the biggest effects and records are broken.

Changes associated with El Niño, including droughts, floods, heat waves and other changes, take a heavy toll in many parts of the world. They can severely disrupt agriculture, fisheries, the environment, health, energy demand and air quality, and increase the risks of wildfires. The risk of adverse effects and more frequent extremes or even records occurring is heightened by global climate change from human activities.

By better understanding El Niño, predictions and alerts can allow us to be prepared for possible unusual effects, but we can and should act to slow down climate change.## 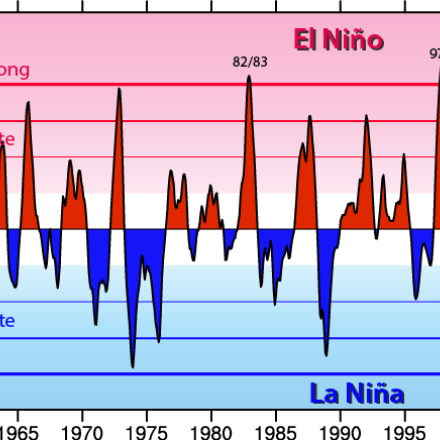 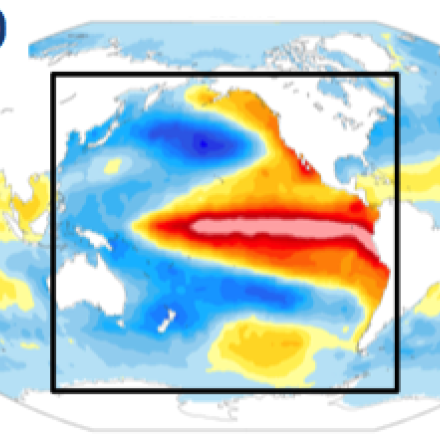 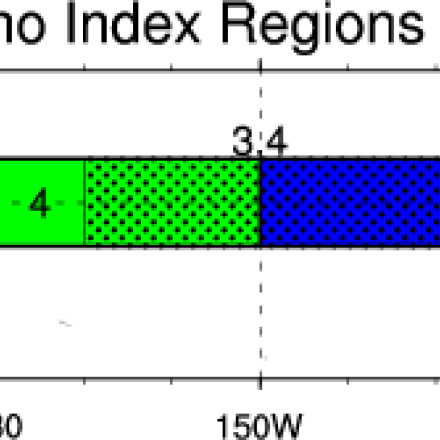 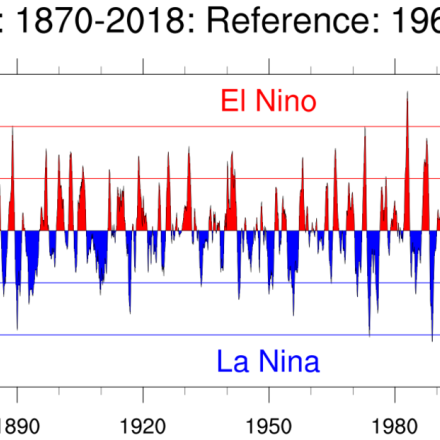 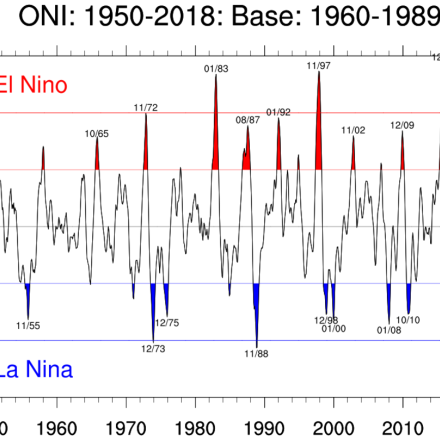