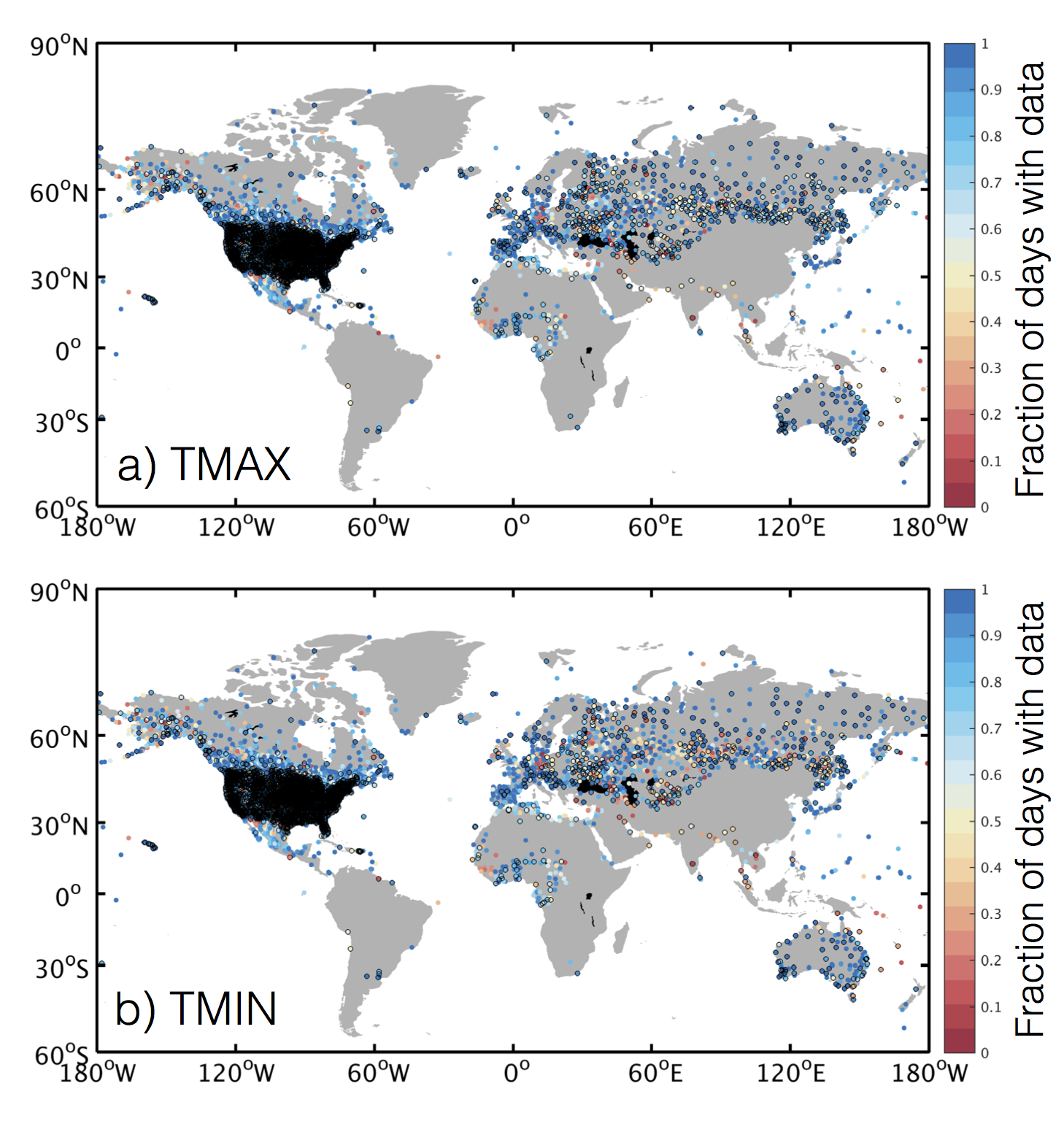 The Global Historical Climatology Network Daily database, GHCN-D, contains meteorological measurements from over 90,000 stations across the globe.  The majority of station records contain precipitation data only, however other key variables including maximum temperature, minimum temperature, snowfall, cloudiness, wind speed and snow depth are available at many locations.  This overview focuses on the temperature data.  This is a key dataset for the validation of temperature estimates from satellites and atmospheric reanalyses.  In addition, the numerous long records in the database are useful for studies of changes in mean temperatures and extremes.  Users should be aware of the many sources of inhomogeneities in the records, as reviewed in the 'Expert Guidance' section of this page.

Researchers focusing on the continental United States may be interested in NOAA's nCLIMGRID, a 5-km gridded version of GHCN-D, available on at the monthly timestep. A related dataset, nCLIMDIV, aggregates the data to the climate division and state levels and is used for NOAA's climate monitoring. (see 'Get Data' tab for links)

Direct measurements of surface temperature with no interpolation or model assumptions

The following was contributed by Karen McKinnon, February, 2016:

The Global Historical Climatology Network-Daily Database contains daily weather-station-based measurements of meteorological variables from over 90,000 stations globally. Approximately two thirds of the stations contain precitation measurements only. The other remaining core elements that are available at many stations are snowfall, snow depth, maximum temperature, and minimum temperature. A limited number of stations may also contain measurements of a wide range of elements, such as cloudiness, wind speed, soil temperature, etc. A full list of the available variables can be found at http://www1.ncdc.noaa.gov/pub/data/ghcn/daily/readme.txt. The remainder of this overview will focus on the daily minimum and maximum temperature data.

The dataset contains direct measurements of near-surface air temperature (2m), with no interpolation or additional inference. For this reason, it is a crucial dataset for comparison and validation of other data types (satellite, reanalysis) that need to infer temperature via calibrations or the assimilated state of the atmosphere. Additionally, many individual station records go back a century or more, so the dataset can be used to assess changes in the climate over time.

- Unequal spatial coverage: different regions of the world have different station densities based upon both the number of actual stations and whether or not the government has decided to freely share the data. The United States and Japan have relatively dense coverage. Coastal regions tend to have more stations that interior regions due to the location of population centers.

- Inhomogeneities: due to changes in various recording practices, there are inhomogeneities (non-climatic, or spurious) trends that are present in the dataset, three of which will be discussed in detail below. While many monthly datasets have been processed to remove the inhomogeneities, at the time of this writing there are no established homogenized daily datasets. The presence and influence of inhomogeneities are most well-documented in the United States (Menne et al., 2009) but can be assumed to be occurring to some extent in other parts of the world. These changes include (1) shifts in the time of observation, (2) switching of thermometer types, and (3) station moves.

(1) Shifts in time of observation

(2) There has been a gradual shift from the use of Liquid in Glass thermometers such as the Six's thermometer to digital thermometers, called the Minimum-Maximum Temperature System, that are easier to read. Due to differences in the way that the thermometers are sited and sheltered, it appears that they have a bias with respect to each other. Based on a 20-year side-by-side study of the two thermometer types (Doesken, 2005), it appears that maximum temperatures are biased approximately 0.4--0.6 °C low with the new thermometers, and minimum temperatures are between 0.1°C too low or too high, where the range is a function of the season. Since the trend in the United States has been from Liquid in Glass to Minimum-Maximum Temperature System measurements, the switch would, on average, induce a spurious cold trend.

(3) The location of thermometer-containing weather stations has changed over time, even if the data is presented as representative of a single location. If there is a trend in land use, it is more likely to be towards urbanization, leading to concerns that there is a substantial urban heat island effect in temperature datasets. While the effect is not negligible in rapidly urbanizing countries like China, it is generally smaller than the 'true' warming induced by climatic changes (e.g. Jones et al., 2008).

- While not necessarily a key limitation, it is important to note that, while all temperature measurements are presented at 0.1 °C precision, this was not necessarily their original precision, or units. Rhines et al. (2015) present a 'precision-decoding' algorithm that is able to back out the true precision of the data. For example, if a temperature is presented as 5.5 °C , but the true precision of the measurement was 0.5  °C (e.g. measurements were only made in intervals of 0.5 °C ), then the uncertainty around the datum is 0.25 °C rather than 0.05°C .

Use of the data require a careful assessment of the biases that may be present due to changes in measurement practices. In general these errors will around an order of magnitude smaller than, e.g., a climate change signal, but should not be ignored.

- The US Historical Climatology Network contains a high-quality subset of the GHCND stations in the United States that have been determined to have sufficient metadata regarding measurement practices.

- the European Climate Assessment dataset, covering Europe and the Mediterranean

There are no quantitative uncertainty estimates in the data. However, measurements are presented with flags that indicate whether data is suspect.

There is no perfect way to compare the point measurements available from weather stations to the gridded fields in climate models. One option is to statistically interpolate the station measurements to a climate model grid using techniques such as kriging. If one uses this approach, it is important to include uncertainty quantification in the interpolation method because of the highly variable station density. Recall, however, that the climate model output would still be expected to contain additional smoothness (even after interpolating the station measurements) because of the numerics of the model (e.g. diffusion).## 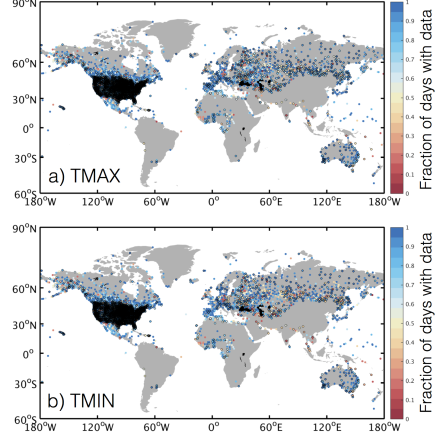 Fraction of days with data within the record of each GHCN-D station for (a) TMAX and (b) TMIN. Stations are shown if they have records beginning no later than 2015, and those outlined in black have records that extend to the present. (contributed by K. McKinnon)