The Palmer Drought Severity Index (PDSI) uses readily available temperature and precipitation data to estimate relative dryness. It is a standardized index that generally spans -10 (dry) to +10 (wet). Maps of operational agencies like NOAA typically show a range of -4 to +4, but more extreme values are possible. The PDSI has been reasonably successful at quantifying long-term drought. As it uses temperature data and a physical water balance model, it can capture the basic effect of global warming on drought through changes in potential evapotranspiration. Monthly PDSI values do not capture droughts on time scales less than about 12 months; more pros and cons are discussed in the Expert Guidance.

By using surface air temperature and a physical water balance model, the PDSI takes into account the basic effect of global warming through potential evapotranspiration

Not as comparable across regions as the Standardized Precipitation Index (SPI), but this can be alleviated by using the self-calibrating PDSI

Lacks multi-timescale features of indices like the SPI, making it difficult to correlate with specific water resources like runoff, snowpack, resevoir storage, etc.

Does not account for snow or ice (delayed runoff); assumes precipitation is immediately available

The following was contributed by Aiguo Dai (SUNY - Albany), September, 2012:

To quantify drought and monitor its development, many drought indices have been developed and applied. Among them, the Palmer Drought Severity Index (PDSI) is the most prominent index of meteorological drought used in the United States for drought monitoring and research, and its variants have been used to quantify long-term changes in aridity over land in the 20th  and 21st  century. The PDSI has also been widely used in tree-ring based reconstructions of past droughts in North America and other regions .

The PDSI was originally developed by Palmer [1965] with the intent to measure the cumulative departure in surface water balance. It incorporates antecedent and current moisture supply (precipitation, P) and demand (potential evapotranspiration, PE) into a hydrological accounting system, which includes a 2-layer bucket-type model for soil moisture calculations. The PDSI is a standardized measure, ranging from about -10 (dry) to +10 (wet) with values below -3 representing severe to extreme drought. The standardization used by Palmer was based on limited data from the central U.S. and tends to yield more severe PDSI in the Great Plains than other U.S. regions. To improve the spatial comparability, Wells et al. [2004] proposed a self-calibrating PDSI (sc_PDSI) by calibrating the PDSI using local conditions, instead of using the (fixed) coefficients used by Palmer [1965] based on data from the central U.S. The sc_PDSI performed better than the original PDSI during the 20th century over Europe and North America.

Another major complaint about the PDSI is that the PE calculated using the Thornthwaite equation in the original Palmer model could lead to errors in energy-limited regions [Hobbins et al., 2008], as the Thornthwaite PE (PE_th) is based only on temperature, latitude and month. This error can be minimized, however, by using the more sophisticated Penman-Monteith equation [referred to as PE_pm, which accounts for the effects of radiation, humidity and wind speed and works best over Australia in a comparison of various PE formulations. Palmer [1965] chose the PE_th mainly based on practical considerations as data for computing PE_pm and other types of PE may be unavailable. This is especially true for global analyses.

The PDSI is also imprecise in its treatment of all precipitation as immediately available rainfall (i.e., no delayed runoff from melting snow), its lack of impact of vegetation or frozen soils on evaporation, and some other processes. Despite all these caveats, Dai et al. [2004] and Dai [2011a] showed that the PDSI values are significantly correlated with measured soil moisture content in the warm season and streamflow over many regions over the world, and satellite observed land water storage changes, and  these correlations are comparable over the U.S. and many other parts of the world. This suggests that the PDSI can be used as a measure of drought over land, especially over the low and middle latitudes. This is largely due to the fact that the normalization in the Palmer model minimizes the errors associated with many of the assumptions made by Palmer [1965] and that actual evaporation is often determined, to a large degree, by the availability of soil moisture (and thus  affected by precipitation), not only by PE, over many land areas . Also, using annual values should minimize the seasonal effect of snowfall on the surface water balance.

Recently, the PDSI was criticized for its inability to depict droughts on time scales shorter than 12 months when monthly PDSI values were used . This is not unexpected as the PDSI was designed to be strongly auto-correlated in order to account for the impact of land memory on drought conditions. However, the Palmer model also computes the un-smoothed Z-index which can be used to track short-term agricultural drought, since it responds quickly to changes in soil moisture. For quantifying long-term changes in aridity and droughts,  the relatively long intrinsic time scale of monthly PDSI should not be a problem.

On the positive side, the PDSI is based on a physical water-balance model, uses both precipitation and surface air temperature (and other variables when PE_pm is used) as input, and takes the precedent condition into account, in contrast to most other drought indices that are based purely on past statistics of certain climate variable(s), which often includes precipitation alone.

From this perspective, the PDSI and sc_PDSI may be considered superior to other statistically based drought indices. This is because the PDSI and sc_PDSI can account for the basic effect of global warming through Palmer's water balance model on droughts and wet spells. The effect of global warming may have already occurred during the 20th century [Dai et al., 2004; van der Schrier et al., 2006a, 2006b; Dai, 2011a] and may increase substantially  in the 21st century [Burke and Brown, 2008; Dai, 2011a]. The effect of surface temperature, which accounts for 10-30% of PDSI's variance during the 20th century, comes mainly through potential evapotranspiration. As precipitation and surface air temperature are the only two climate variables with long historical records, the PDSI makes full use of these data and can be readily calculated for the last hundred years or so for most land areas.The impact of the choice of PE_th or PE_pm is relatively small for the 20th century, the use of PE_th tends to overestimate the impact of the globalwarming for the model-projected 21st century climate. Dai (2011a, JGR) compared the various versions of the PDSI and recommended the use of the sc_PDSI with the PE_pm (i.e., sc_PDSI_pm), especially for model projections. All the references cited here can be found in Dai (2011a, JGR) and in the Key References below.##

Long-term PDSI over the continental US through January, 2014. Retrieved on 31 Jan 2014 from http://www.cpc.ncep.noaa.gov/products/analysis_monitoring/regional_moni… 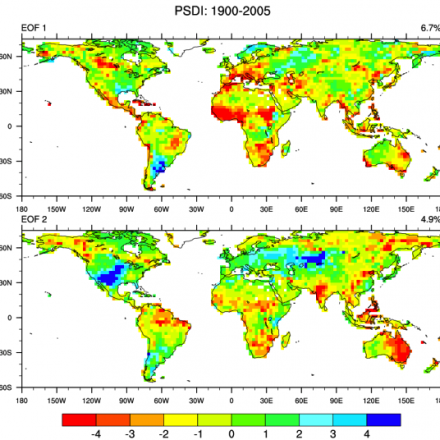