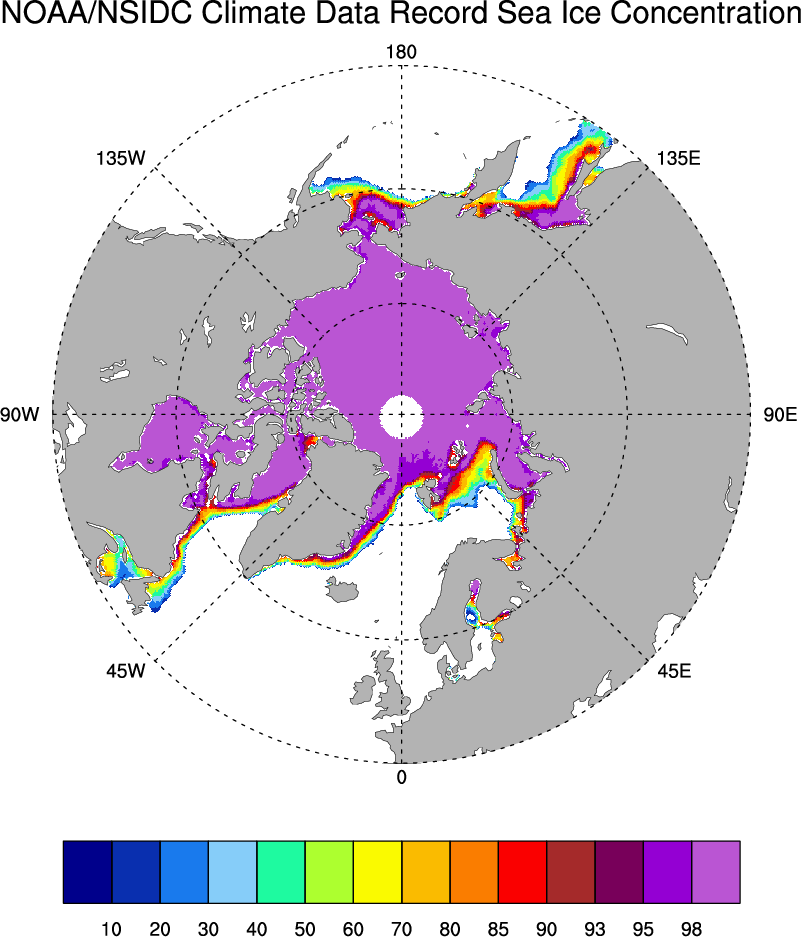 The NOAA/NSIDC Climate Data Record (CDR) of sea ice concentration is available at 25 x 25 km spatial resolution in daily or monthly timesteps for 1987-2014. It provides a consistent interpretation of sea ice for the satellite record, with the intent of being suitable for studies of climate variability and change. The CDR is produced by an automated and independent reprocessing of SSMI brightness temperatures: NSIDC implements both the NASA Team and Bootstrap algorithms on daily brightness temperatures. The data are passed through automated weather filters and quality control steps. The final CDR value is the higher of the concentrations estimated by Bootstrap and NASA Team. Choosing the higher value exploits the general characteristics of the two algorithms; while both NASA Team and Bootstrap tend to underestimate concentrations, NASA Team is sensitive to snow layering and surface emissivity variations, while Bootstrap tends to underestimate concentrations in very low temperatures. The CDR thus reduces the overall low bias in a fully automated and documented procedure. However, the generalities that CDR addresses may not apply in all cases.

Sea ice concentrations for 1978-2014 directly from NASA/Goddard using the Bootstrap and NASA-Team algorithms are provided in the same netCDF files as the NSIDC-produced CDR, providing longer records & facilitating comparisons amongst the algorithms.

Compares Team and Bootstrap algorithms; No explicit new steps to address the effects of melt ponds, surface snow layering, surface emissivity variations, and other sources of error on the retrieved brightness temperatures

Official version only extends back to 1987, however, an analogous field, the "Goddard merged" estimate, is available back to Nov, 1978

The following was contributed by Walt Meier (NASA/Goddard; now at NSIDC), November, 2013:

The NOAA/NSIDC sea ice concentration climate data record (CDR) is based on a series of multi-channel passive microwave sensors, beginning with the Nimbus-7 SMMR in October 1978 and continuing through the present from a series of DMSP SSM/I and SSMIS sensors. Sea ice concentration (areal fraction of ice within a grid cell) is estimated from combinations of passive microwave brightness temperatures at different frequencies and polarizations using empirically derived algorithms. Two algorithms were developed at NASA Goddard Space Flight Center and are distributed by NSIDC: the NASA Team Algorithm (NT) and the Bootstrap Algorithm (BT). The products adjust algorithm coefficients for each sensor, based on overlap periods between sensors, to optimize consistency over the entire record.

The CDR also includes ancillary fields of melt onset and a spatial standard deviation field showing regions of high spatial gradients and large disagreements between NT and BT concentrations, both of which indicate potentially higher errors. While a quantitative value, the field is not strictly an error estimate. However, it has been found to correlate well with other error estimates and the general error characteristics of different ice conditions. Thus, the field may be suitable for relative weighting of concentration when combining with other observations or with model estimates.

In addition to the CDR concentration parameter, concentration fields from the Goddard BT and NT products, as well a combined-Goddard estimate (created the same way as the CDR concentration), are included as ancillary estimates. These fields give users access to the individual algorithm products if desired. Also, the Goddard fields apply additional post-processing, including manual corrections (see below) to correct obvious errors and interpolation to fill missing data, thus resulting in “cleaner” fields, though without full provenance. Finally, CDR concentration estimates have not yet been created from SMMR due to data quality issues of the input brightness temperatures. The Goddard fields allow users to have access to the full record of passive microwave estimates, starting in 1978.

The concentration fields are produced on a nominal 25 km resolution polar stereographic grid. However, some frequencies used in the algorithm have a coarser sensor resolution (footprint). Thus the gridded fields are oversampled and the effective resolution may be less. Daily and monthly average fields are produced starting in October 1978. During the SMMR period, temporal coverage is every other day.

The low spatial resolution limits the precision of the ice edge location and makes the products of limited use for operational support (e.g., navigation). The low resolution also results in “land spillover” – a mixture of land and open ocean in a footprint that has a microwave signature similar to ice. This leads to false ice along the coast. Automated filters remove much of such ice, but some may remain. As mentioned above, surface melt and thin ice, often leads to large underestimation of concentration. Finally, while the atmosphere is largely transparent at the microwave frequencies employed, it can significantly contribute in some situations. Most notably, thick precipitating clouds, as well as wind roughening of the surface, can lead to false ice returns over open ocean. Automated filters remove much of these “weather effects”, however some remain. In the Goddard processing, the remaining artifacts are removed by the aforementioned manual corrections. For the CDR processing, no manual corrections are done – all processing is automated to meet CDR requirements for transparency and reproducibility.

Concentration estimates are most reliable within the consolidated ice pack during cold, winter conditions (errors ~5-10%). The estimates are least reliable close to the ice edge and during melt conditions, where biases may be 20-30%. At any given location (grid cell) errors may be large (>50%), though over larger regions, average errors are much smaller. The scale is well-suited for comparing with or assimilating into models. However, care should be taken when using concentration because of the tendency to underestimate, especially during melt. Ice extent (ice vs. no-ice, with a 15% threshold) may be best for use with models, though concentrations have been successfully used in many model comparisons.

The passive microwave sea ice concentrations are most suitable for hemispheric or regional-scale analyses of trends and variability, comparison with climate models, or large-scale process studies. The concentration fields are least reliable for small-scale studies (e.g.,

While the focus here is on the sea ice CDR product, the general attributes and usage guidelines apply to the source NASA Team and Bootstrap algorithm products, which are referenced below.## 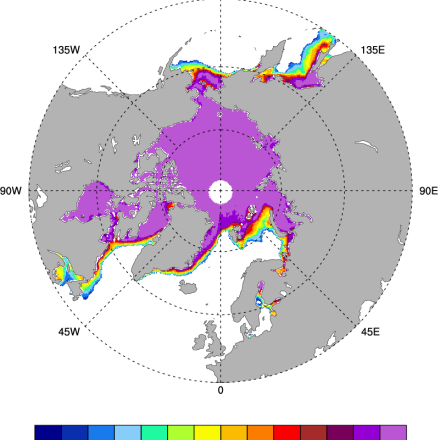 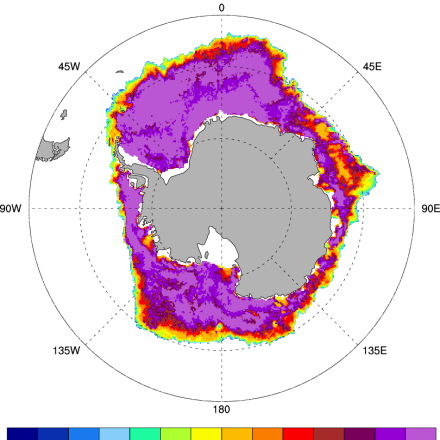 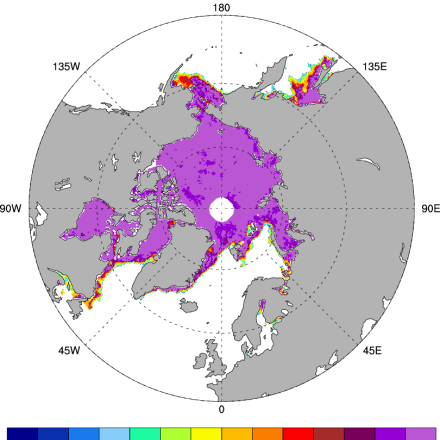