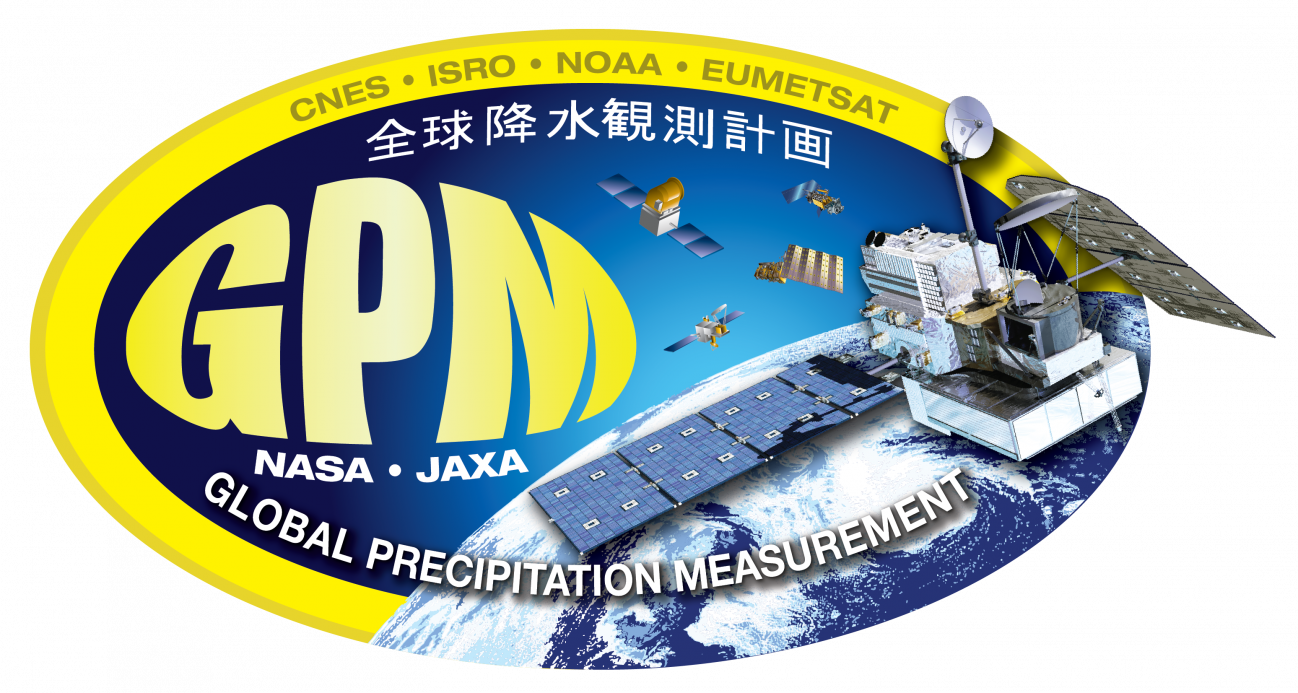 IMERG (Integrated Multi-satellitE Retrievals for the Global Precipitation Measurement) is NASA's updated precipitation algorithm, while the Global Precipitation Measurement (GPM) mission is an international satellite mission launched by NASA and JAXA on Feb. 27, 2014. The GPM is a follow on to the TRMM satellite mission. NASA have applied the IMERG algorithm to both TRMM-era and GPM-era data, creating a relatively long (20+ years), high spatial (0.1 degree) and temporal (30 minute) resolution satellite-based precipitation record with global coverage (but of limited value in the polar regions).

IMERG is being used to produce a suite of data products; climate research users will probably most be interested in the "Final Run," which is described in the Expert Guidance here. The attributes of IMERG's data products make them applicable for a wide range of studies. However, researchers primarily interested in climate change (or low-frequency variability) signals will most likely want to look at the GPCP data products, either on their own or in tandem with IMERG products.

As IMERG depends on a varying group of "satellites of opportunity," the temporal record may not be homogeneous. Users looking for climate change signals (or say, ENSO statistics) should consider evaluating data products like GPCP, which emphasize temporal homogeneity.

Satellite algorithms in general emphasize "most likely" statistics. Studies of extreme events need to be mindful of what information these data products can realistically provide.

The following was contributed by George J. Huffman, September, 2022:

A long-term, near-global gridded precipitation dataset may be categorized as a High-Resolution Precipitation Product (HRPP), which strives to provide the best instantaneous precip estimates, or as a Climate Data Record (CDR), which emphasizes homogeneity over instantaneous accuracy. Of course, each approach tries to maintain the “other” goal, but it is secondary. The Integrated Multi-satellitE Retrievals for the Global Precipitation Measurement (GPM) mission (IMERG) is an HRPP, while the GPCP conforms to CDR standards. As such, IMERG depends on a continuously varying “virtual constellation” of satellites of opportunity, currently some 11 microwave satellites operated by 6 agencies. Particularly early in the IMERG record, there were relatively few microwave satellites. The flip side of this is that the early part of the IMERG record has more dependence on microwave-calibrated IR estimates, and the IR coverage declines after the first few years. Such variations should steer users away from IMERG to the GPCP for climate studies. Additionally, IMERG’s ~20-year record is really not sufficient for climate change studies. On the other hand, analyzing IMERG in parallel with the GPCP can give some insight by confirming particular results or not. One result that is nearly automatic is that the GPCP and IMERG agree rather closely at the monthly scale over most land areas because they both use the same GPCC monthly gauge analyses, and in similar ways. As well, it is likely that the climatological statistics provided by IMERG, including the histogram of fine-scale precipitation rates and aggregations thereof, are likely stable. The issue of the changing constellation of inputs is more problematic for trying to characterize time-varying climate parameters. Finally, precipitation analyses in general, and satellite algorithms specifically, emphasize some version of “most likely” statistics. This fact implies that studies of extremes need to be realistic about what these products can be asked to do.

Interpreting Precipitation Estimates as a Function of Rain Rate

If you plot observed versus satellite precipitation grid values at the full 0.1° half-hourly resolution, the skill is modest, with huge relative error at small precipitation rates. Studies show that time and/or space averaging substantially reduces the random error, characteristically collapsing the scatterplot toward the 1:1 line. The point of handing out the data at fine scales with large uncertainty is that the user has the freedom to create averages in ways that best correspond to the problem at hand. In contrast, the relatively well-behaved IMERG Final Run monthly product forces the user to use data in calendar-month units; this prohibits using a monthly average from one month’s mid-point to the next. At the fine scales in full-resolution IMERG Final Run, we usually observe that random error dominates the error budget – that is, the part of the error that averages out with sufficiently long averaging. The bias (the persistent part of the error that tends to bedevil climate studies) is hard to estimate, although we have tried to make a fair estimate of the “real” climatology for the TRMM era:

It is fair to say that error estimates are lagging behind where we expected them to be. One contribution to this current research topic is for the work by Maggioni and collaborators:

There is some hope that this approach will naturally encompass both random and bias errors. The cost is that we’re going to end up with quantiles of estimated precip at each time at each grid box. Such detail will not be suitable for all users, so we will need to continue producing a simplified error estimate as well. IMERG provides one such simple Quality Index,

provides a more-quantitative view of the bias errors that we’ve long suspected. The seriousness of the results depend on which statistics you’re trying to use: how important is it to get the lightest precip rates right that give 5% of the amount, but 40% of the events, or whatever the numbers are in the area of interest? Essentially all the precip data set algorithms have focused on getting the averages right, and it’s a much more challenging problem to also get the distribution of precip rates quantitatively correct.

The Algorithm Theoretical Basis Document, Technical Document, referred publication, and links therein for a description of the steps involved in producing the IMERG products:

To summarize, GPM, and its predecessor mission, the Tropical Rainfall Measuring Mission (TRMM) are joint U.S.-Japan satellite missions to monitor quasi-global precipitation and to estimate its associated latent heating. TRMM was launched on in November, 1997, from the Tanegashima Space Center in Japan, and the GPM Core Observatory (CO) followed in February 2014. The precipitation-relevant instruments on the TRMM satellite include the Precipitation Radar (PR), an electronically scanning radar operating at 13.8 GHz (Ku band); TRMM Microwave Image (TMI), a nine-channel passive microwave radiometer; and Visible and Infrared Scanner (VIRS), a five-channel visible/infrared radiometer. The GPM CO carries the Dual-frequency Precipitation Radar (DPR), which provides both 13.8 (Ku) and 35.5 (Ka) GHz channels, and the GMI Microwave Imager (GMI), a 13-channel passive microwave radiometer.

Following the general concept of the CMORPH-Kalman Filter (CMORPH-KF; Joyce et al. 2011), PMW overpasses are propagated forward and backward, and weighted together with PMW-calibrated geo-IR estimates to create half-hourly estimates. The Kalman Filter weights are computed dynamically by region as average correlations between the various satellites and the TMI/GMI. New for Version 06, propagation is based on movement of vertically integrated water vapor in analyses provided by the Modern-Era Retrospective Analysis for Research and Applications, Version 2 (MERRA-2)

As such, it is globally complete, and could be used to give an estimated phase for any other precipitation dataset, whether or not its precipitation occurrence matches that shown by IMERG. User requests for a simple Quality Index (QI) led to two distinctly different QI definitions for the half-hourly and monthly data sets in Version 05, and similarly in the current Version 06,

After this processing is complete, the half-hourly multi-satellite fields are summed for the month and combined with the monthly accumulated Global Precipitation Climatology Centre (GPCC) rain gauge analysis using inverse-error-variance weighting to form a monthly best-estimate precipitation rate, which is the (native) monthly IMERG Final Run. The final step is to scale all the half-hourly estimates for the month to sum to the monthly value (for each gridbox separately). The completed IMERG Final Run precipitation (in mm/hr) estimates have a half-hourly temporal resolution and a 0.1°x0.1° spatial resolution. The spatial coverage is global, but with gaps outside the latitude band 60°N-S where the surface is snowy/icy due to uncertainties in the microwave retrievals over such surfaces and the lack of geo-IR data outside that band.

Limits are imposed on the month-to-half-hour scaling to avoid unphysical results, so particularly in low-rain areas, the half-hourly IMERG Final Run values in a month may not sum exactly to the corresponding native monthly dataset. For this reason, the native monthly dataset is preferred for providing monthly values.

The GPM data system was designed to provide episodic, complete reprocessings of the TRMM/GPM products to take advantage of ongoing research to improve the various scientific algorithms. [Such reprocessing is now considered a best practice for data archives in general.] The latest reprocessing for GPM moved the products from Version 05 to 06, and the current data set has been processed using the Version 06 algorithms.

The transition to V06 for the IMERG Final Run began 13 March 2019 at PPS and the new data started flowing down to the GES DISC as well. However, on 15 March 2019 an error was discovered in processing the initial batches of V06 IMERG Final Run months. A design choice in the code ended up retaining microwave precipitation estimates in the latitude band 60°N-S when there is snow/ice on the surface, rather than masking out the estimates due to low performance in such cases. [Masking for microwave retrievals over surface snow and ice outside that band is correct.] All then-existent V06A Monthly and Half-hourly IMERG products (June 2014-December 2015) were retracted, and corrected datasets released. The GPM-era Final Run begins on 1 June 2014 to allow a spin-up of calibration files and extends to the (delayed) present. Retrospective processing for the TRMM era Final Run began on 15 April 2019. Due to IR data issues at present, the actual start of the record is June 2000 to allow spin-up of the calibration files. Initial Processing of the Early and Late Runs began on 1 May, with Retrospective Processing commencing when the Final Run was fully retrospectively processed. Version 06A supersedes all prior IMERG versions, and users are urged to shift to the new datasets as soon as practical. For more details on Version 06, see https://gpm.nasa.gov/sites/default/files/2020-10/IMERG_V06_release_notes_201006_0.pdf .

At press time, the IMERG development team was nearly done preparing the processing code for the next major release, as Version 07. Retrospective processing of the Final Run was expected to commence in November 2022, and be completed in early 2023.

There are two changes that will interrupt existing workflows using the V06 files:

These changes are driven primarily by persistent confusion among new users about what these variables represent.

Several algorithmic upgrades are expected to provide appreciably improved performance, including: Version 07 GPROF retrievals from PMW sensors, the SHARPEN procedure for approximately preserving regional histograms of rainrate despite the averaging intrinsic to the Kalman filter, revisions to the calibration process to control biases, correction of a gridding error that systematically shifted PMW data 0.1° to the East, and use of the new PDIR retrievals from IR data.

As things move along, the Global Precipitation Measurement mission (GPM) web site, https://gpm.nasa.gov/data/news , is the right general source for news.

As well, the GPM web site hosts has a one-stop set of web pages specifically aimed at new users, listing all of the basic and derived TRMM/GPM datasets available through Goddard Space Flight Center: https://gpm.nasa.gov/data/directory.

These pages include documentation about the data sets and algorithms, and contact information. IMERG-specific announcements will be posted to the IMERG mailing list, to which precipitation data users may subscribe (just ask through https://gpm.nasa.gov/contact). ## 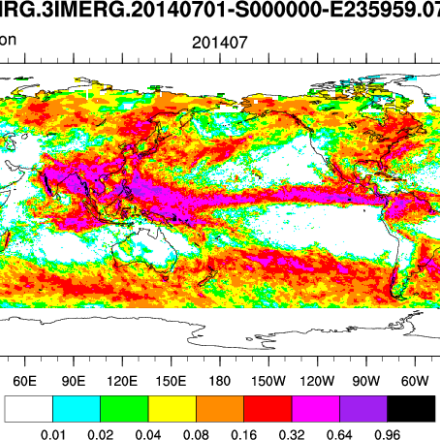